Home > News > US: Passengers on small plane record the...

US: Passengers on small plane record their crash 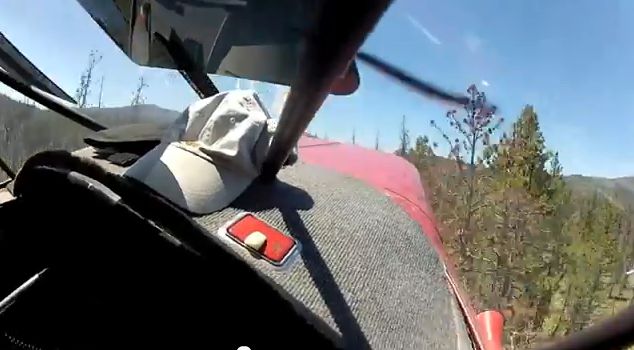 Story + Video — The video shows the beginning of what was hoped would be a perfect plane ride, with the pilot of a 1940s-era Stinson and his three passengers smiling as the plane rumbles down a dirt runway in rural Idaho.  But soon after take-off, the plane went down in a nearby forest, with the camera still rolling.

Everyone on the plane survived to tell — and show — their harrowing tale.

The four-seater had just taken off from an airport in Stanley, Idaho, June 30. The video, which was shot through the cockpit window, shows the runway disappearing beneath the plane and the sun glinting off the glass as the aircraft gained altitude to clear some nearby trees.

The plane only ascended to about 60 or 70 feet, then dipped, hit the trees, and tumbled from the air.

In a telephone interview with the National Transportation Safety Board, which is investigating the incident, one of the passengers said the plane started losing altitude and experienced a downdraft right before it clipped the trees.

According to The Idaho Statesman, the passengers — who were on their way to a hiking trip — remembered hearing the “thud of treetops” as the plane made its unexpected and scary descent.

Tol Gropp, whose father, Les Gropp, was piloting, remembers losing consciousness when the plane hit the trees. The next thing he remembers is hanging upside down, according to The Statesman.

The NTSB reported Les Gropp sustained serious injuries in the accident and his son told the newspaper he had a broken jaw, but has otherwise recovered.

The Gropps are a religious family and credit their faith with helping them escape death.

“We are a pretty religious family and so are my friends. Some people will mark this off as my imagination… but we feel strongly that due to those blessings that help arrived so quickly in such mass numbers,” Tol Gropp told The Idaho Statesman’s Rachel Roberts.

The NTSB has taken the plane to a secured storage facility for further examination.

Theres a really important thing needs to be considered (seriously) when flying in the heat and above sea level – density altitude…ie the air too thin to get the same performance you would normally get at sea level and cool air. One less person and less bags may have had a better outcome

Looks as though the plane never had enough altitude from the take off leaving little room for error, but I’m no pilot.