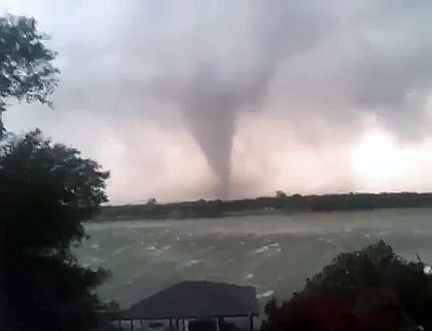 Column by Mike Nelson, frontman and meteorologist for 7News in Denver, Colorado

Most tornadoes in the United States occur in the central plains, with the greatest likelihood of twisters in the southern plains around Kansas, Texas and Oklahoma. Colorado lies of the western fringe of “Tornado Alley”, but our state still averages between 40 and 60 tornadoes per year.

Most tornadoes form from large rotating thunderstorms called “super cells.” These monster storms tend to develop ahead of cold fronts that push southward from Canada across the central U.S. As the fronts sag into the warm and humid air that covers the southern plains, the colder air wedges under the warm air, creating lift.

The lifted air rises up to form thunderstorms that can rapidly grow to heights of 40 to 50 thousand feet above the ground.

The storm pushes high into the sky, reaching into the jet stream – the band or river of fast moving air that flows around the world. It is the increase in wind speed with height that causes the thunderstorm to begin a large, slow counterclockwise rotation.

This rotating thunderstorm is what is classified as a “Super Cell.”

Once the super cell storm develops, the best analogy for thinking about how the tornado forms is to think of a figure skater doing a spin. The skater starts with their arms out, and is rotating rather slowly. As the skater brings their arms in, the rotation begins to speed up. In physics, this is called “the conservation of angular momentum.”

The rotation gets faster and faster as the size of the rotating column grows narrower. This is a very simplistic description, but eventually this narrow rapidly rotating column of air will drop to the ground as a tornado.

Tornadoes are classified by the wind damage that they cause and are rated by the Fujita Scale – developed by Dr. Ted Fujita of the University of Chicago in the 1970s.

As of 2007, this scale was replaced by the enhanced Fujita (EF) scale. The EF attempts to rate tornadoes more accurately, taking into account that it often requires much lower wind speeds to create F5-like damage.

The new EF scale is now the official standard to measure the strength of tornadoes:

Tornadoes are not named like hurricanes are, but the strong or deadly tornadoes are usually remembered for the town or location that they affected. For instance, the infamous “Xenia Ohio Tornado” of April 1974, or in Colorado, the “Limon Tornado” in June of 1990 and the “Windsor Tornado” in 2008.

Perhaps the single worst tornado on record was the great “Tri-State Tornado” of March 1925. This huge tornado started in southeastern Missouri and tore a path of destruction all across Illinois, before ending in western Indiana. The twister covered a distance of 219 miles and was on the ground for over 3 hours.

In the days before adequate warnings, the storm caught everyone off guard. The Tri-State Tornado killed 689 people, injured over 2,000 and caused 17 million dollars in damage – a very large figure in 1925!

In Colorado, the peak season for tornadoes is in early June. At that time, the almost daily dose of thunderstorms can easily rise up to the jet stream level and begin to rotate into a super cell. These storms tend to form along the Front Range, roll over the Denver metro area and then really get severe over the eastern plains of the state.

About 90 percent of all Colorado tornadoes occur out east. Although tornadoes can form in the high country, the rough terrain tends to disrupt the rotation needed to form a super cell.

In my nearly 40 years in meteorology, I have been through many tornado watch and warning situations. I have walked through a small town in southern Wisconsin, named Barneveld, just hours after it was ripped apart by an EF5 tornado.

Only one time have I seen a tornado, as most of the time I am right here in the 24/7 Weather Centre issuing warnings and weather updates, so I do not get much of a chance to chase these storms.

Tornadoes have done some very unusual things. The powerful winds can pick up a railroad locomotive, lift a water tower off the ground, and drive blades of grass into walls just like a hammer and a nail. At the same time, there have been reports where tornadoes have picked a refrigerator off the ground, tossed it several hundreds of yards, dropped it back on the ground and not even broken an egg inside the refrigerator!

Tornadoes usually form on the back edge of the thunderstorm cloud, meaning that most of the storm has already passed overhead. Often the rain, hail, thunder and lightning have mostly gone by and then the tornado occurs. That is why you will often see the sky looking very bright behind the tornado – a dramatic contrast to the very dark funnel.

After the tornado, the sky often quickly clears as the storm moves away. There are, however, no hard and fast rules for tornados, so sometimes the twister occurs in the midst of a large area of thunderstorms, so after the tornado occurs, it just rains and rains.

Here is some information about rain and hail: Most of the rain that we get in Colorado forms from a mix of water droplets and ice crystals in the clouds. Under certain conditions, water will remain in liquid form even with temperatures that are well below freezing. This type of water is called “super-cooled.”

In most of our summertime clouds, we have a mix of super-cooled water and ice crystals floating around high above us. The ice crystals rapidly grow as they “feed” off of the super-cooled water and they basically form big fat snowflakes. These snowflakes fall slowly to Earth and begin to melt as they reach warmer air closer to the ground. The resultant raindrops will fall to Earth at about 40kph.

In stronger thunderstorms, the tiny ice crystal gets bombarded by the super-cooled water thanks to the extreme turbulence in the storm cloud. The ice crystal forms a small stone of ice which is the beginning of a hailstone.

If the storm is quite strong, there are intense updrafts of wind that can keep the growing hailstone suspended in the cloud for a long time. A hailstone that is the size of a golf ball needs an updraft of nearly 100 kph to stay aloft. A baseball sized stone requires a 160 kph updraft to keep it “afloat.”

When the hail falls to Earth, they come zipping down at 130-160 kph. That is why it is a good idea to stay indoors during a major hailstorm!