US: Numerous tornadoes kill 9, injure over 100 – and more coming 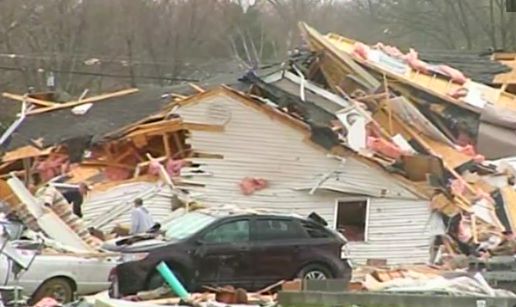 Major concern in the US today as deadly tornadoes start 6 to 8 weeks earlier than usual – possibly confirming a prediction made recently by US forecasters that this years tornado season (which usually peaks in May) will be another above average season.  9 people have been killed so far and that death toll may rise further….Story by CNN…

A storm system that produced a number of tornadoes in the Midwest was blamed for at least seven deaths in two states, officials said Wednesday.

At least three people were killed when a tornado touched down in Harrisburg, Illinois, early Wednesday, the Saline County Sheriff’s Office said. About 100 others were injured.

The number of fatalities in Harrisburg could rise, the city’s mayor said, in the wake of the twister that appeared to have been on the ground for several miles, said the city’s mayor, Eric Gregg. The path of destruction was about three or four football fields wide, he said.

The scene in the southern part of Harrisburg, where the tornado struck, was one of debris and collapsed houses. Commercial and residential buildings were crushed. A tractor-trailer could be seen laying on its side, off the highway.

Crews were searching “piece by piece” for survivors, Gregg said.

Storm damage in Missouri town It was “a path of destruction that is absolutely devastating,” he said. “It’s a very difficult day for a very good community in southern Illinois.”

At least five people were killed in Harrisburg because of the storm, he said.

Crews were also examining some structural damage to the Harrisburg Medical Center, to judge whether any patients must be moved, Gregg said.

“It’s like nothing I’ve ever seen, and something I don’t care to see again,” he said.

Earlier, two deaths were reported in Missouri as a result of the storms.

A woman was killed overnight in Dallas County, Missouri, the coroner there said, without giving further details.

An apparent tornado near Cassville, Missouri, left another person dead, the Barry County Sheriff’s Office said. That person was thrown out of a mobile home, the sheriff’s office said.

The pounding rain and swirling, destructive winds raking several Plains states injured others in Kansas, as well. That state was socked Tuesday night and Gov. Sam Brownback declared a state of emergency for a small town hit badly by the severe weather.

Along with tornadoes, the center warned of the possibility of golf-ball-sized hail, winds up to 75 miles per hour and “dangerous lightning.”

The state of emergency was declared for the tiny Kansas town of Harveyville, about 20 miles southwest of Topeka. Emergency teams combed the community to assess damage. Authorities said they believe a tornado hit the town Tuesday night.

Some homes and a church were damaged, and there were numerous reports of trees and power lines down throughout the area, according to the Kansas Adjutant General’s Department.

At least one person was critically injured and transported to a hospital in Topeka while four others were briefly trapped in a structure.

“It is quite hectic,” said Bill Beasley of the American Medical Response for Shawnee and Wabaunsee counties, who said nine ambulances were dispatched to the scene.

The American Red Cross is assisting and officials have set up a shelter at a local high school.

There were also reports of a tornado touchdown in Kansas’ Reno County, near Hutchinson, and another in central Nebraska.

The same powerful winter storm system spawned the severe weather in Dallas County, Missouri, and along the Missouri-Arkansas border.

A path of destruction cut six to seven miles through Taney County, Missouri, damaging homes and businesses, according to Sheriff Jim Russell, who said there were “some injuries,” but no reports of fatalities.

The resort community of Branson is in the county. Russell said he had no specific information about damage in the town.

So glad they are not a frequent event in NZ. Often wonder how people who have houses destroyed cope with the decimation and loss of life. So frequent in mid west USA.