US: Nearly 4,000 flights cancelled ahead of historic snowstorm 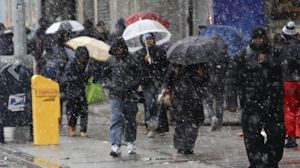 A complex set of weather systems will congeal into one massive storm and dump close to a metre of snow on some parts of the northeastern US this weekend.

Blizzard Warnings are in effect for much of upper New England including the coasts of Maine, Massachusetts, Rhode Island, Connecticut, New York and New Jersey.  This includes major cities like Boston and New York City.

The heaviest snow totals by Sunday morning local time (Monday morning NZDT) are expected in New England from coastal Maine to Connecticut, as well as parts of Upstate New York.  30 to 60cm of snow is expected in these areas.  Some locations, especially in and around coastal New England may exceed 1 metre of fallen snow.

But technically, you can’t have blizzard without strong winds.  And there will be plenty of that.  Winds could gust up to 115 km/h are expected along the coast of Massachusetts as the storm begins to arrive.  Winds gusting to around 80 km/h are throughout the storm across much of coastal New England.

The storm is expected to pretty much shut down New England.  Thousands of flights have already been cancelled.

Train service is also being shut down.

This storm will likely be on for the record books.  According to the US National Weather Service, there have only been 7 storms to hit the Boston area that produced 50cm or more of snow.  The top two produced 68 cm of snow.  One of those hit in 2003.  The other was infamous “Blizzard of 1978”.

This storm will likely top both of them.