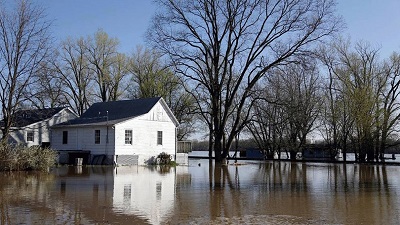 The largest river in the United States, the Mississippi, is flooding.

This is not an uncommon occurrence this time of year.  Spring snow melt can often lead to rises on the Mississippi.

What makes this unusual is the fact that just less than one year ago, the water level on some parts of the river was so low barges couldn’t get through.

This year’s flooding as another noteable aspect too; it has turned deadly.

The Mississippi River is cresting now at many places.  But the flooding is already being blamed for three deaths.  The flooding has also swamped hundreds of thousands of acres of farmland.  It has also closed sections of major roads.

And the Mississippi isn’t the only river that’s flooding.  In fact, parts of 9 states are being hit hard with flooding as other rivers spill out of their banks.  So far it looks like Illinois has been hardest hit.  Reports of widespread and costly damage have been coming out of several places around the state, including Chicago, the state’s largest city.  Record flooding has been recorded at around a dozen locations around the state, including the north branch of the Chicago River in Chicago.

Other states affected by the Mississippi River flooding include, Iowa, Missouri, Kentucky, Tennessee and Arkansas.  Michigan, Wisconsin and Indiana have been affected by flooding from other rivers.

More rain is expected through Wednesday, although rainfall amounts will be much lighter than what was seen over the last several days.