US – Fire seasons now much longer 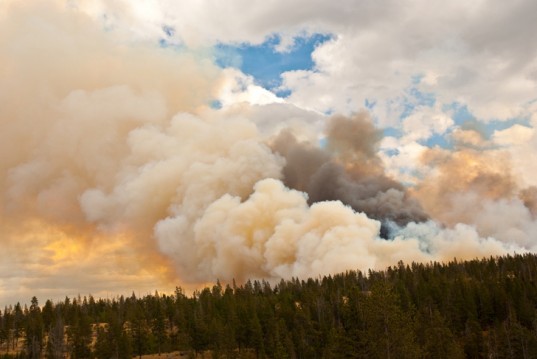 America’s wildfire season lasts two months longer than it did 40 years ago and burns up twice as much land as it did in those earlier days because of the hotter, drier conditions produced by climate change, the country’s forest service chief told Congress yesterday.

But the forest service was forced to make sharp cuts to fire prevention programmes, and reduce the numbers of fire-fighters and engines because of budget pressures, Thomas Tidwell, the chief of the United States Forest Service, told the Senate committee on energy and natural resources.

“Hotter, drier, a longer fire season, and lot more homes that we have to deal with,” Tidwell told the Guardian following his appearance. “We are going to continue to have large wildfires.”

Tidwell spoke as authorities began to contain the first big fire of the 2013 season: the Powerhouse fire, which erupted in the rugged hills north of Los Angeles, blackening 18,000 hectares, destroying six homes, and forcing thousands to flee.

All evacuation orders were lifted but wildfires were also burning in northern New Mexico, Colorado and Alaska.

Early fires, such as Powerhouse, or monster-fires, which consume tens of thousands of acres in record time, were now the new normal, Tidwell said.

“It’s hard for the average member of the public to understand how things have changed,” Tidwell said.

Human factors were also important. Americans have increasingly been building homes in areas where fire had been part of the natural landscape.

“This is a product of having a longer fire season, and having hotter, drier conditions so that the fuels dry out faster. So when we get a start that escapes initial attack, these fires become explosive in that they become so large so fast that it really limits our ability to do anything.”

The forest service is predicting an active fire season for 2013 in the south-west, as well as California, Washington, Oregon and Idaho.

But those more fire-prone conditions in the south-west are occurring at a time of budget constraints. Even before the sequester, the forest service was diverting funds from forest management towards actively fighting fires, the committee was told.

Since 2000, the forest service has almost doubled its spending on fighting fires from $540m to $1bn last year.

The money for putting out fires has come from other forest programmes – including those proven to reduce the risk of future wildfires by clearing out old brush – were facing cuts of 50% in the current budget, Tidwell said.

“When you have a constrained budget situation the money has to come from some place, so that’s why it’s so hard,” he said.

The forest service estimates up to there is significant hectares of forest lands – or more than 40% of the US entire system – is now in need of such treatment.

Firefighting budgets were also being trimmed this year, he said. The forest service, which last year took on 10,480 fire fighters, would be brought down below 10,000.