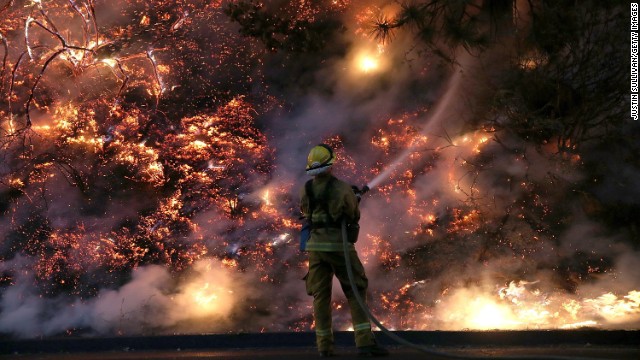 “This fire is very dynamic,” said Tina Rose, spokeswoman for the multiagency incident command. “The access to the fire has been hampering us. It is so difficult to get into those canyons.”

Firefighters were buoyed by the fact that winds appeared to have died down a bit and the massive Rim Fire’s rate of growth has slowed. The fire had doubled in size from Thursday to Friday, and the total loss stood at nearly 130,000 acres early Saturday evening, much of it in Stanislaus National Forest.

The blaze, which remained 7% contained, was spreading primarily to the east.

While the Rim Fire has consumed 12,000 acres in the northwest section of Yosemite National Park, so far it has had little or no direct impact on Yosemite Valley, a popular spot for tourists and home to many of the famous cliffs and waterfalls in the park.

Still, the park has seen a few cancellations and one western entrance was closed.

Gov. Jerry Brown on Friday issued a state of emergency in the San Francisco area because of threats to utilities.

“The San Francisco Public Utilities has been forced to shut down transmission lines,” he said in a statement.

Much of San Francisco’s water comes from the Hetch Hetchy Reservoir, which lies within Yosemite and is just east of the fire. There was good news on that front Saturday, as officials said there was no effect on the water quality and delivery. 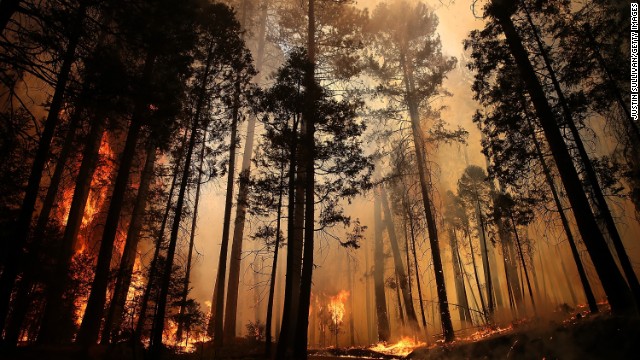 About 4,500 structures, many of them vacation homes, were under threat, according to InciWeb, a federal website that collects information from agencies like the U.S. Forest Service and Bureau of Land Management.

Firefighters have been hampered by a lack of moisture from the sky and on the ground.

“The wind today is going to be better for firefighting, but we are still dealing with bone dry grass and brush,” Rose said Saturday.

Lee Bentley of the U.S. Forest Service said crews were making progress, but “it is going to be awhile.”

Eight fixed-wing aircraft and 10 helicopters were aiding the effort.

“We are the No. 1 priority in the country,” said Bentley. “We are getting what we need.”

The command center said a major effort was aimed at holding the fire east of the north fork of the Tuolumne River.

“Additional efforts are focused on the eastern edge of the fire in Yosemite National Park to minimize impacts to our national treasure,” it said in a statement.

What you need to know about wildfires 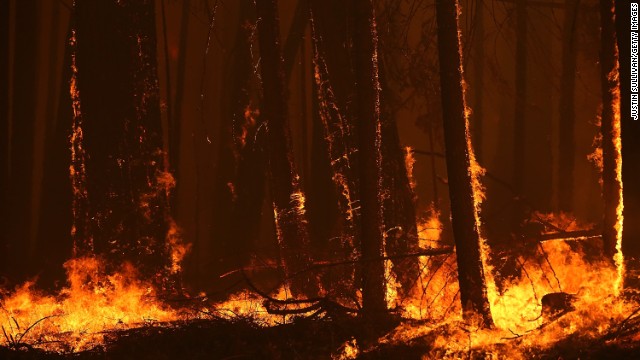 In a tinder box, but scenery is wonderful

The inferno threatened the Yosemite gateway communities of Groveland and Pine Mountain Lake just outside the Stanislaus Forest.

“It’s crazy, and it has been for five days,” Kirsten Lennon, whose home is threatened, told CNN affiliate KCRA on Friday. “Your heart’s racing a little faster.”

Joe Riley, co-owner of the log-construction Cub Inn in Groveland, has canceled tourist reservations until next weekend. The last remaining guest leaves Sunday.

“We are on a voluntary evacuation order,” Riley told CNN on Saturday afternoon. “If things get bad or we get a direct order, we have everything packed, all the pictures off the wall, and all the documents and business records.”

The loss of business at the height of the season, and possible cancellations into September, may cost the inn between $10,000 and $20,000, he said.

The closure of the Yosemite entrance on U.S. Highway 120 West means tourists coming through the community must drive an extra hour to get into the park. 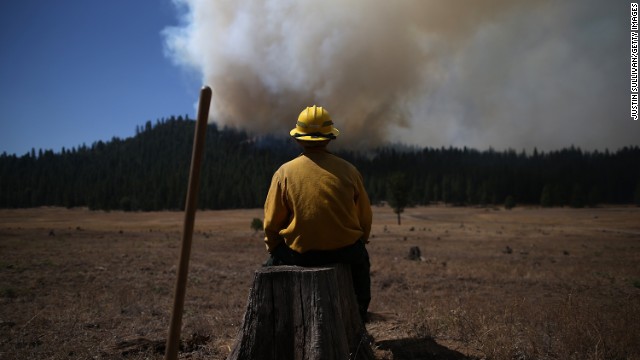 People in the community generally are handling the situation pretty well, though many have evacuated, Riley said.

“I understand we are in a tinder box and it is risky,” he said. “But it is beautiful.”

The Tuolumne County Sheriff’s Department, meanwhile, issued evacuation advisories for the town of Tuolumne and nearby Ponderosa Hill, according to InciWeb. It was not clear how many residents were covered by the evacuation advisory.

“Be advised that areas burned by the Rim Fire may still pose hazards,” an advisory said. “Fire-weakened trees, burning stump holes and large fire apparatus may be present. Entry into the burned areas is strongly discouraged.”

Authorities say the Rim Fire started on August 17. The cause is under investigation.

Gediman, of Yosemite National Park, said the Rim Fire’s impact was restricted to the entrance closure at Highway 120 West and a backcountry section used by hikers. Temperatures were a little cooler Saturday than on Friday, he said.

The park typically has 15,000 visitors on a busy summer weekend. August sees an influx of visitors from other countries, a few of whom have called to check on conditions.

Ranger programs went on as normal Saturday and campgrounds were full.

“If somebody cancels, there are 10 people that will take their spot,” said Gediman.

Yosemite, with hundreds of campground sites and lodging units, had nearly 4 million visitors last year, according to the National Park Service.