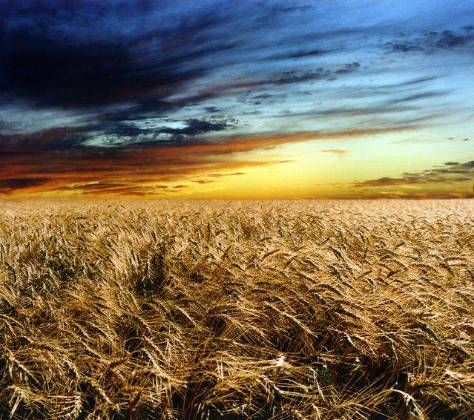 Similar to our own situation but on a much grander scale the future of farming in the US is looking to adapt to potentially different weather scenarios.

Emerging from the worst drought in 50 years, US farmers are bracing for long-term challenges from climate change including blasting heat and more capricious rainfall.

About 80 percent of the farmland in the world’s biggest soybean and corn (maize) producer was scorched by extreme heat and drought last summer, savaging crops and sending global prices for the key food commodities soaring, hurting poor countries that depend on imports.

Across the heartland of the corn crop in the Midwest state of Iowa, farmers have turned a jaundiced eye on last season’s disaster to focus on this year’s weather conditions. By early March, 53 percent of the land was still abnormally dry or suffering drought. But as more and more accept that the climate is changing, farmers are putting their faith in technology to help them beat global warming.

For Bruce Rohwer, the vagaries of weather are part and parcel of agriculture. “My grandfather was farming during the Dust Bowl drought in the ’30s, my father was farming in the ’50s,” said Rohwer, president of the Iowa Corn Growers Association in Des Moines. “In my career, I have faced several droughts and floods. We will be challenged to do our best practices.” The consequences of the 2012 drought have been severe.

As crop yields plummeted, corn and soybean prices hit records. Livestock like cattle were sent to slaughter prematurely because of parched grazing land and sky-high feed prices. Even so, farmers largely weathered the crisis. High prices offset lower yields. And yields would have been much worse without the widespread use of genetically modified seeds especially resistant to dry conditions. And insurers compensated the losses with a record $14.7 billion in payouts — enough to allow farmers to get ready for a new season.

Most Iowa farmers recognize that the climate is changing, according to a survey conducted by Iowa State University, even if many do not blame human activity for it. “They do recognize they have to change their operations to adapt to it,” said Gene Takle, a professor of agronomy at the university.

Over the short term, the US Department of Agriculture says, the country’s farms will be “fairly resilient to climate change” due to their ability to adapt to challenges. For one, farmers are betting on advances in genetically modified seeds that can withstand more heat and drier conditions. They are also increasing crop rotation and limiting practices that boost moisture evaporation and exacerbate soil erosion.

Many are investing in new irrigation and drainage systems that not only drain off excess water but can retain water within them for later use. Agri Drain, which makes some of the new systems, says sales are booming in the US and also across Canada.