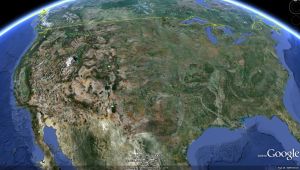 Yesterday Death Valley in California reached 52C degrees.  The overnight low was 38C.  CNN takes a look at why farmers are becoming increasingly nervous as more than half of continental US officially is declared a drought zone and heat records are again being broken.

It’s been more than a month since Jerry Mann’s 9,000-acre farm has gotten rain, and when the 56-year-old Montana man examines the dry, shriveling kernels of wheat and barley, he’s understandably nervous.

The high Tuesday in Great Falls, Montana, is 35C, a number that pales in comparison to the triple digits seen recently in other parts of the country, but presents major problems for its residents — particularly those involved in agriculture.

With cooling temperatures in the South and Midwest, national attention has shifted to Arizona and California, where temperatures are well above 38C.

But the real story is temperatures almost 10 degrees C above normal in northwestern cities such as Great Falls, according to CNN meteorologist Sarah Dillingham.

Mann, 56, knows the land and knows the crops. He was born into farming, and on that land he’s raised wheat, barley and a family.

“You worry,” he said, sighing. “But there’s nothing you can do about it.”

The heat came early this year, but it isn’t uncommon for Montana temperatures to swing wildly, said Great Falls Fire Chief Randall McCamley. It’s one of the things he likes about Great Falls, where he has lived for 30 years.

“We can break a record high and a record low on the same day here,” he said. “It keeps us guessing.”

But at least 51 people elsewhere in the United States have died from heat-related — or heat-exacerbated — causes in the past two weeks. It is difficult to determine an exact number because of a lag time in official counts and differences in the states’ standards.

The National Weather Service has issued excessive heat warnings for parts of Arizona, California and Nevada through Wednesday where temperatures hit 52C in Death Valley – a record high for the US this year..

In the Las Vegas Valley, local officials are opening up cooling stations Tuesday to give residents a place to beat the heat. Forecast highs in the 40s will continue into next week.

But as the Southwest heated up, the rest of the nation began returning to normal summertime temperatures.

A cold front pushed through the Midwest, as well as parts of the South and mid-Atlantic states, sparking severe storms and heavy rain in some areas.

The cool-down follows a heat wave that roasted much of the country for more than a week and comes as the National Climatic Data Center reported the mainland United States has experienced the warmest 12 months since record-keeping began in 1895.

The report does not take into account blistering heat from this month, with 2,116 high-temperature marks either broken or tied between July 2 and July 8 in communities nationwide.

But it does incorporate the warmest March recorded as well as extreme heat in June, which also helped make the first six months of 2012 the warmest recorded of any January-June stretch.

“There are a lot of things going on that have been very unusual over the last several months,” said Dev Niyogi, earth and atmospheric sciences professor at Purdue University.

In the last half of June, 170 all-time temperature records were matched or smashed in cities across the lower 48 states. The U.S. State Climate Extremes Committee also is reviewing whether 113-degree temperatures in South Carolina and 112-degree recordings in Georgia qualify as all-time records in those two states.

Love the names for the place of extreme temps. July 10th 1913 in Death Valley, Furnace Creek it was recorded as 134 F
(57 C)
http://www.nps.gov/deva/naturescience/weather-and-climate.htm

As has been noted on this and many other forums, that record is regarded as unsound. There is no fully accepted reading anywhere beyond about 54.5C (130F). The Azizia reading is still being quoted everywhere, and is grossly unsound.