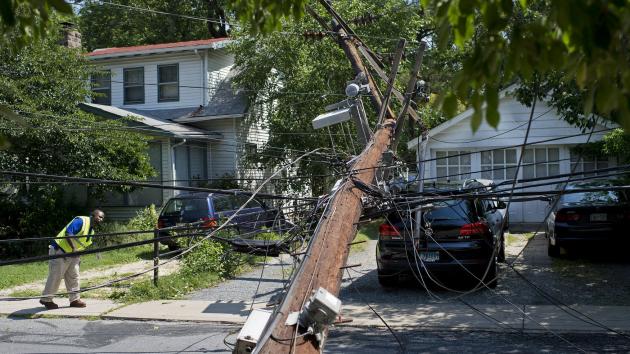 Thunderstorm damage in the US has doubled since 1970 and transatlantic flights are set to become bumpier.

Homeowners in the United States ought to hail-proof their roofs and transatlantic air travellers brace for more turbulence, according to two assessments of climate change impacts unveiled this week at the annual assembly of the European Geosciences Union (EGU) in Vienna.

Climate change can be detected in the retreat of glaciers and sea ice. It increases heat and air pollution, raising the risk of cardiovascular and respiratory diseases, particularly among elderly people. But changes in the atmosphere may also have other adverse affects for humans. For one thing, they seem to have markedly increased the risk of severe thunderstorms over parts of the United States.

At the EGU meeting, Eberhard Faust, head of climate risk and natural hazards research at the reinsurance company Munich Re in Germany, presented a study showing in the US, the annual economic losses from sizable thunderstorms — those that cause more than $250 million in damages — have doubled since 1970.

His team also found that storms have become more unpredictable. From 1990 to 2009, years with exceptionally large storm activity and high losses alternated frequently with relatively calm years. Year-to-year variation and average losses were significantly higher than they were between 1970 and 1989.

Storm damage
Insurance companies rate thunderstorms — which may include hailstorms and tornados — as the second biggest cause of weather-related losses in the US, behind hurricanes. In 2011, a record tornado season in the United States, overall economic losses from thunderstorms added up to US$47 billion. Of those, only US$27 billion were covered by insurance.

The Munich Re researchers took pains make figures from different years comparable by accounting for socioeconomic changes and the growth of urban areas. Even after normalization, they found, annual losses exceeded $10 billion in seven years since 1990. The worst year for damage between 1970 and 1989 was 1974, but even then the toll remained below $10 billion.

Yet “it is risky to try to detect climate trends from damage, because there are so many moving parts”, says Roger Pielke Jr, a climate-policy researcher at the University of Colorado Boulder, who in a study published last year1 found no long-term increases in normalized tornado damage or incidence between 1950 and 2011. Pielke Jr’s study did not look at thunderstorms in general.

By analysing data from the US National Center for Atmospheric Research (NCAR) in Boulder, Faust’s team found that both convective energy and wind shear — the difference between wind velocity near the ground and at higher altitudes — have increased. The changes seem to make the formation of storm cells easier, they say.

Whether greenhouse-gas emissions from fossil-fuel burning are the culprit is unproven.

“We have not yet clarified if it is natural climate variability or man-made climate change that is driving the changes,” says Faust. But an observed increase in atmospheric humidity at sea level, another factor in thunderstorm physics, has previously been attributed to human influence on climate2, he notes.

Travel disruption
Also at the EGU meeting, Paul Williams, a meteorologist at the University of Reading, UK, reported the results of a climate simulation suggesting that climate change may make transatlantic flights bumpier.

Aircraft use satellite and on-board radar to avoid thunderstorm clouds. But pilots on transatlantic routes cannot easily circumvent areas of hard-to-detect ‘clear-air’ turbulence linked to atmospheric jet streams. Passengers on the 600 or so daily transatlantic flights typically spend around 4% of the cruise time in turbulence.

Williams says that by mid-century, the frequency of clear-air turbulence in winter could increase by up to 170%. His findings are published in Nature Climate Change3.

Robert Sharman, an atmospheric scientist at NCAR, says that Williams and his team applied well-tested techniques to assess the likelihood of turbulence, but that such predictions are difficult and are afflicted by large uncertainties.

“Whether greenhouse-gas emissions from fossil-fuel burning are the culprit is unproven.” It won’t be proven because it just isn’t happening.

Williams says that by mid-century, the frequency of clear-air turbulence in winter could increase by up to 170%. His findings are published in Nature Climate Change3.- Let’s get every one on board this sham. Let’s just invent a % and let everyone believe it.

Robert Sharman, an atmospheric scientist at NCAR, says that Williams and his team applied well-tested techniques to assess the likelihood of turbulence, but that such predictions are difficult and are afflicted by large uncertainties. Exactly – LARGE UNCERTAINTIES

Why do we pursue “climate change” as a given?

This is what is causing the bad weather everywhere this insightful Video says it all
http://www.youtube.com/watch?feature=player_embedded&v=5vlJ2lN9hg8