US: 62 wildfires blaze through Western states 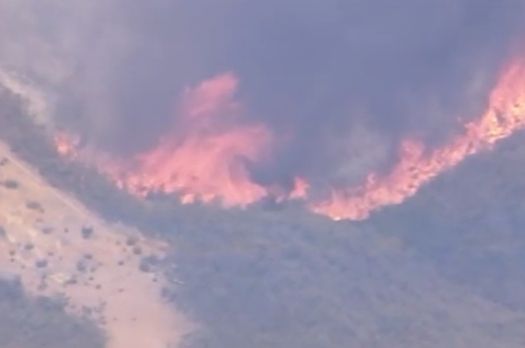 The fire raging near Cle Elum is one of several devastating Western states this week.

In all, 62 fires, including 16 new large fires, were burning as of Tuesday, the U.S. Forest Service reported. They have destroyed dozens of homes and are threatening many more.

Wildfires destroy homes in Oklahoma Washington’s Taylor Bridge Fire began as a brush fire Monday afternoon. By midnight it had swallowed up 16,000 acres, and by Tuesday, 16,500 acres, or 41 square miles, were burning.

Authorities have already evacuated between 400 and 450 people near the Taylor Bridge Fire, said Rex Reed, the incident commander. He was not aware of any injuries.’

“The fire behavior I would classify as extreme,” Reed said. “Extreme fire conditions. We expect a very busy day. Very rapid rates of spread. There are multiple heads on this fire.”

He said authorities were working to activate National Guard troops to assist in the operation in Kittitas County, where a state of emergency has been declared.

In Idaho, a blaze has killed a 20-year-old firefighter. Two other firefighters have been injured in Oregon and California.

Anne Veseth died Sunday while fighting the Steep Canyon Fire near Orofino, said Phil Sammon of the Forest Service. He said the death was accidental but could not confirm how it happened.

However, CNN affiliate KTVB said Veseth was killed by a falling tree.

Residents of Veseth’s hometown, Moscow, remembered the young college student as someone who always gave back to community.

“This is a stark reminder of how dangerous the business is that we are in,” Sammon said. “We are extremely saddened by this loss.”

Today, the fire danger spiked with searing temperatures and single-digit humidity across Western states. In some places, winds were gusting around 80km/h..

More than 750 firefighters and support personnel are now working in Oregon and Nevada to corral the 418,235-acre Holloway Fire, the largest of the Western wildfires ignited by a lightning strike on August 5.

“We saw huge fire whorls all night,” said Fred Kaninski, fire behavior analyst for the Holloway Fire. “It was burning like daytime.”

The northeast flank of the fire burned into Oregon Canyon, where a firefighter suffered burns to the leg and forearm and minor smoke inhalation, the Bureau of Land Management said.

The injured firefighter was rushed by helicopter to a hospital in Winnemucca, Nevada, and was released Sunday night. She is being sent to a burn center in Salt Lake City for further evaluation, the bureau said.

In California, a pair of fires north of San Francisco in Lake County burned 7,000 acres and were 30% contained Tuesday, according to the California Department of Forestry and Fire Protection.

Two buildings were destroyed and one was damaged, CNN affiliate KGO reported. An additional 480 homes are threatened, and a firefighter was injured while battling the flames, said Julie Hutchinson of the state’s forestry and fire department. She did not have information on the status of the injured firefighter.

Meteorologists predict the dry heat will last into next week — not good news for firefighters. Any thunderstorms that pop up could present more bad news than good, since lightning strikes could spark more flames.

However, rain doused the killer Waldo Canyon Fire that blazed out of control through parts of Colorado for many weeks this summer. On Tuesday, Colorado was not on the national map for large fires.