Home > News > Upper half of NZ subject to showers...

Upper half of NZ subject to showers 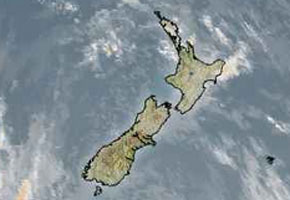 Scattered showers are over much of the North Island this afternoon in a southwesterly airflow, there are a few remaining showers over upper parts of the South Island however they will clear this afternoon. Some cloud is lingering back over Canterbury from the front that moved through early this morning however it should gradually clear later this afternoon or evening.

One of the only places that doesn’t require a jersey so far today is Napier on 18 degrees which is the warmest spot around the country at present. For the past 24 hours the highest rainfall has been on the West Coast of the South Island south of Hokitika with 15 to 20mm of rain falling in the ranges.

And just a note regarding the thunderstorm that moved over Banks Peninsula on Monday night early this week, a friend who lives there noted a lot of hail fell blocking up some gutters and there were some torrential downpours. Apparently the thunder was really loud, am gutted I missed it!