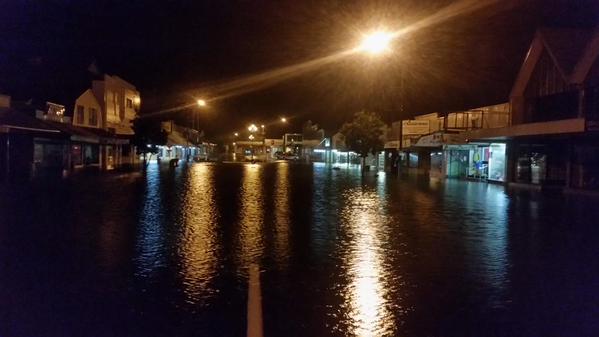 UPDATED 11am: The West Coast has borne the brunt of the South Island storm that was expected to bring snow to much of Canterbury and Otago.

In the last 30 hours, 215 millimetres of rain has fallen on Hokitika.

Westland District Councillor Andy Thompson said even by West Coast standards, the region has experienced a serious weather event and its been impossible to avoid getting wet.

Some houses have been evacuated.

“It would appear that the flooding systems for drainage couldn’t keep up, and water levels rose around quite a few of the residential streets.”

WeatherWatch Head Analyst Philip Duncan says the rain is already easing as we head into the weekend – which looks mostly dry.

“Sunday there is another surge of rain and showers, but nothing like what weâ€™ve just seen” Duncan says.

“All of next week looks mainly dry at this stage for the West Coast – Monday to Friday, while the West Coast rain is today moving into the lower North Island, with isolated pockets of heavy rain.”

Weather conditions have practically isolated the West Coast, with the Arthurs and Lindis Passes closed due to snow.

The road between Reefton and Greymouth has been closed by flooding.

Almost all roads between Hokitika and Haast are affected by severe surface flooding, with drivers urged to take extreme care.

Civil Defence regional manager Chris Raine said they have to wait until daylight to asses the situation and then try to reach people.

He said no lives are at risk but is urging people not to travel.

A Hokitika rest home has been evacuated after surface flooding on the road outside spilled into the building.

Around 20 residents from Allen Bryant Life Care were transported to various locations, including the local hospital and ambulance station around midnight.

Fire Service southern communications shift manager Andrew Norris said it was done as a precautionary measure around high tide, as emergency services couldn’t be certain how much more water would get in the building.

He said a handful of other houses in Hokitika have also had floodwater through them.