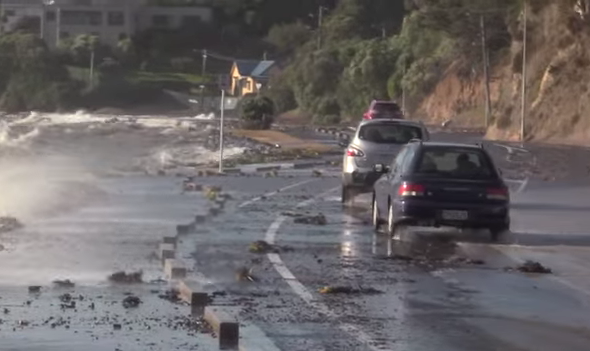 The severe gales that left more than 10,000 Otago homes and businesses in darkness yesterday should start to fade today, but it will still be a cold start for those in the south.

Thousands of people are still without power this morning and WeatherWatch.co.nz is forecasting a cold morning in Otago and Southland.

The strong winds seen in the region yesterday should weaken today, however, and it will be mostly sunny with a high of 12C-17C.

It will also be a much colder day across Canterbury, Marlborough, Wellington and Wairarapa as a southerly from the Southern Ocean replaces the hot north-westerly seen yesterday.

At least 2500 remained in darkness overnight in the south, as winds downed and damaged power lines throughout the region and 7600 consumers lost power in Dunedin alone.

At least two vessels were torn from their moorings on Otago Harbour, and last night they were still unrecovered.

Flights were cancelled at Dunedin Airport, leaving hundreds stranded overnight, and late last night the cruise ship Explorer of the Seas was still at Port Chalmers waiting for the wind to drop, delaying about 3000 passengers and 1180 crew.

The strongest gusts recorded were 152kmh at Taiaroa Head at 6pm and 7pm, while Goat Island, by Port Chalmers, had winds of 144kmh at 7pm.

The device that recorded wind at Dunedin Airport stopped working early in the evening, probably because of the weather, but recorded 124kmh gusts about 6pm.

Smaller outages were also affecting customers in Hampden and Moeraki on the Waitaki Network and those in Lawrence, Waihola and Clarks Junction on the PowerNet network.

“We understand the inconvenience that service interruptions cause and we will be working hard to restore power to remaining customers as soon as possible,” he said.”Delta crews are assessing damage and responding where it is safe and possible to make repairs.”

PowerNet chief executive Jason Franklin said power outages affected about 2900 customers on the network, but supply was restored to all but 675 last night.

The repairs could take several days, although linemen hoped to have the network fully functional today.

“It will depend on the extent of the damage but it’s nowhere near as bad as what we had in September and October,” he said.

Waitaki Network chief executive Graham Clark said falling trees cut lines between Maheno and Shag Point. Lines staff were yet to locate the faults late last night and it was unknown how many customers had been affected, although it would number in the hundreds, he said.

Senior Sergeant Craig Brown, of Dunedin, said two boats, a catamaran off Portobello and a yacht in Deborah Bay, broke away from their moorings and late last night, both were still loose on the harbour.

On Otago Harbour, powerful waves whipped up by southwest winds made landfall at Macandrew Bay, flooding the road and washing debris from the harbour across both lanes.

Parks around the city were littered with broken branches .

A large pine tree fell on State Highway 1 near the summit of the Kilmog about 7.30pm, blocking the northbound lane, while trees also fell on the highway at Waianakarua, Lovells Flat and Herbert.

There was a temporary road closure in Herbert, but a Fire Service spokesman said all were being dealt with last night.

There were many jobs last night in Otago, including dealing with downed or arcing power lines, but none was major, he said.

There was, however, “a fair amount of damage”.

Two Air New Zealand flights arriving from Christchurch and one from Auckland were listed as cancelled over the same time period, as was a Jetstar flight from Auckland.

Ms Crawford said more than 400 people were affected by the cancelled departures, and she understood Air New Zealand had been helping with accommodation.

The winds also caused disruption to flights at Queenstown Airport.

The corresponding outgoing Air New Zealand flights were also cancelled, as was the 9.40am Jetstar service to Sydney.

A Queenstown Lakes District Council spokesman said wind also caused a tree to fall at Arthurs Point, partially blocking the road, about 2pm. It was cleared by contractor Downers.