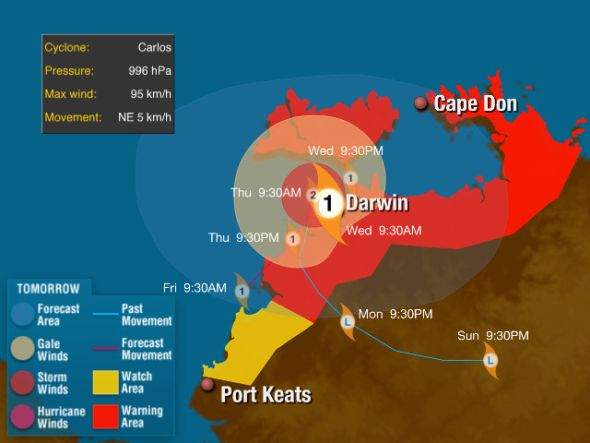 As of this afternoon Tropical Cyclone Carlos was about 15km southeast of Darwin and moving slowly east northeast.

A cyclone warning has been issued for coastal areas from the Daly River Mouth to Goulburn Island, including Darwin, Croker Island and the Tiwi Islands.

Carlos is currently a category 1 system with winds gusting near the centre at up to 95km/hr. The cyclone is expected to remain near the coast tonight, before moving south to southwest on Thursday.

The slow movement of the Tropical Cyclone is leading to heavy persistent rain, which has led to some very high rainfall totals.

Darwin has now recorded over 500mm since 9am on Monday, bringing the wettest 48 hour total on record. It has also now been the wettest month in 8 years for the city.

Temperatures reached a top of just 24 degrees today which is the coolest February day on record and 7 degrees below average. Rain and cloud will bring another cooler day tomorrow, with temperatures expected to stay in the mid twenties.

Heavy rain and strong winds are expected to continue in Darwin tomorrow as Carlos remains close to the coast.