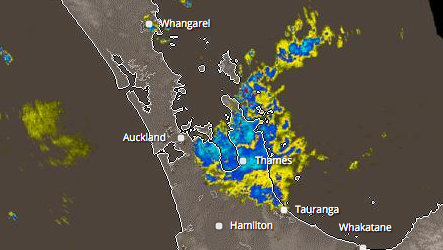 UPDATE: 11:30AM – Flooded roads that cut off access in and out of the eastern Coromandel Peninsula township of Whitianga have now been reopened.

Motorists are now able to use State Highway 25 to reach the township but there are traffic controls in place.

The New Zealand Transport Agency had earlier closed State Highway 25 both to the north and south of Whitianga.

Waikato Civil Defence said while the all roads to the township were now open they were down to just one lane.

All roads into Whiti are now open, but only one lane. It’s still pretty wet and grotty, so #DriveLikeANana

Conditions were described as “pretty wet and grotty” and those venturing out were encouraged to “drive like a nana”.

The Thames-Coromandel District Council said it was now low tide which was good news for the region’s usual flooding hotspots.

However, civil defence was still on alert with high tide expected at 3pm.

A heavy rain warning has been issued for the entire Coromandel Peninsula.

Waikato Civil Defence earlier reported there was a slip on the road at Kuaotunu hill. It warned motorists to expect delays.

Update: SH25 25 NORTH & SOUTH of Whitianga are now both OPEN with Stop/Go’s in place. Take extra care in area & drive to the conditions ^LC

NZTA and Thames-Coromandel District Council contractors were currently checking the extent of flooding.

It said the slow-moving trough would possibly not clear the area until early Friday morning.

People in the area were being advised to stay up to date with the latest forecasts in case the warch was upgraded to a warning.

He said the streams might continue breaching their banks throughout the morning.

Slips were are also possible across the peninsula which could lead to further road closures or even power cuts, he said.

While the rain was intense it was not widespread beyond the Coromandel region.

The wet weather was expected to ease during the day but isolated heavy downpours were possible.

Mr Duncan advised local residents to monitor the rain radar at MetService as well as the latest roading information from NZTA.

It’s dawned a tale of two islands today with northern New Zealand sitting a whopping 20 degrees higher than cities in the south.

Weatherwatch head analyst Philip Duncan said a warm, humid night in Auckland has kept temperatures up at 18 degrees Celsius while Dunedin is shivering on minus 2 degrees.

“New Zealand is divided into three pieces at the moment. Cold in the south. Cloudy and damp through middle New Zealand and warm and humid with tropical downpours in the north” said Mr Duncan.

At 8am Auckland had 18 degrees with a mix of sun and cloud.

But at the other end of the country Dunedin was experiencing frosty conditions and sitting on a nippy minus 2.