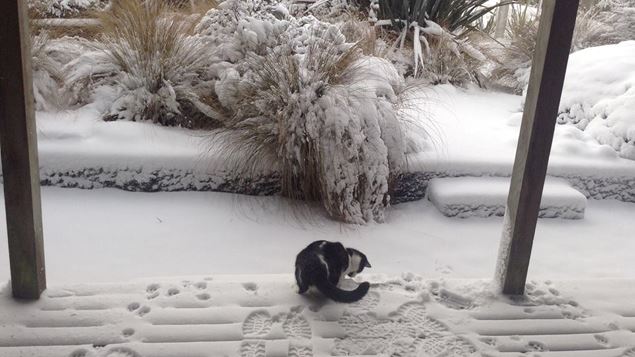 The chilly weather has moved north this morning.

Winter is gripping not just the traditional snow spots around the Central Plateau, but has frozen the usually balmy Gisborne.

A fleet of trucks lined up on snow-bound roads in and out of Gisborne has now been been cleared after heavy equipment was brought in to move them.

But correspondent Murray Robertson says State Highway Two in and out of the city is still closed.

“The job for contractors this morning is to get in as soon as they can, and that’s as soon as access will allow them, to get the road reopened.”

“It’s going to take some hours before we get traffic moving on State Highway 2.”

Weatherell Transport manager Kevin Kirk has a fleet of produce trucks in Gisborne waiting for conditions to clear.

He says there are also general export containers waiting to leave.

“It’s put us right behind, so then we have the orders in the afternoon for the next day, so it puts the pressure on but we’ve been there and done it before.”

Access into Gisborne is still available by going around the cape.

The Desert Road is closed, as are alternate routes around Mt Ruapehu.

The road between Napier and Taupo is closed – and Gisborne is nearly cut off with parts of State Highway Two cut off north and south of the city.

The Rimutaka Hill Road in Wellington was closed, but has reopened.