Up to 1,000 feared dead in India floods, landslides 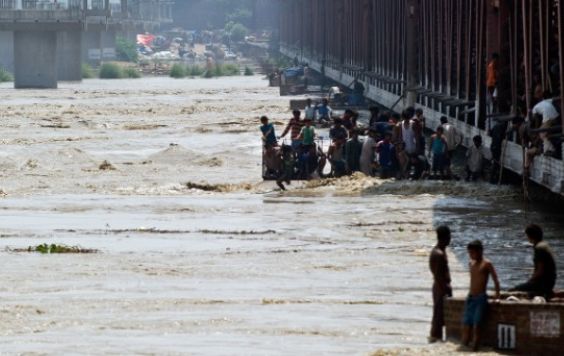 Indian authorities scrambled to rescue thousands of people trapped after floods and landslides ravaged the Himalayan region, leaving up to 1,000 feared dead.

The exact number of those killed will not be clear until the muddy waters are cleaned up and the bodies recovered, said Vijay Bahuguna, the chief minister of Uttarakhand state, which is the worst-hit.

“Certainly, the number of the dead is much higher than 550 … and it could be around 1,000 as figures coming in suggest,” he said Sunday NZT.

Emergency operations include the military and all forms of transportation, including trains moving people for free.

About 70,000 have been evacuated since the floods hit this month.

Barrages of water, mud and rocks have hit scores of towns and villages in the Indian state, inundating homes, shrines, roads and vehicles.

Bahuguna, has described the disaster as a “Himalayan tsunami.”

Dotted with temples and often referred to as “the Land of Gods,” Uttarakhand attracts large numbers of pilgrims from around India to its mountainous reaches. Those travelers, many of them far from home and short on belongings, are now caught up in the destruction.

Thousands of rescue workers are trying to reach more than 50,000 people cut off by the waters. Bahuguna told CNN’s sister network CNN-IBN on Friday night that the death toll was 556 but could rise. The bodies “were either buried or floating in slush,” he said. It will take 15 days to complete evacuations in the province, he added.

Other parts of northern India, including New Delhi, have also been hit by flooding, but Uttarakhand has suffered the worst of the devastation.

The rains over the region have eased in the past few days, aiding in the rescue of about 30,000 people, Bahuguna said.

Gurjit Singh, who had traveled to the town of Gobindghat with his 12-year-old son, described a chaotic scene as people tried to escape the flooding last week.

“There was nothing but death in front of us,” Singh said Thursday after getting out of a crowded car ferrying people to dry, flat land. “Now that we’ve got out, we feel like we’ve got a second life.”

His son, Rana Udesh Pratap, said the trek to safety was long.