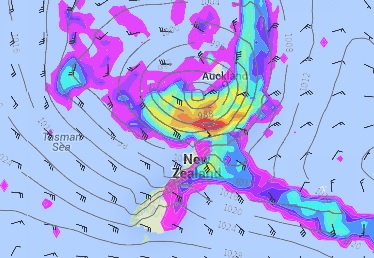 This coming week is certainly looking unsettled and we have a fair bit to go over, low pressure will for the most part always be close by and what looks like ex tropical cyclone Ita moves down out of the Tasman Sea along the western side of the country on Thursday and Friday.

Farmers from Northland down to the Manawatu may finally get some good rain however lets just hope itâ€™s not too much in one hit. Too much of a good thing can sometimes not work out…. but weâ€™ll have to roll with what nature deals us.

Tomorrow a low sits off the West Coast of the South Island in the Tasman Sea while a high lies out east centred over the Chatams, this drags a northeasterly airflow over the country. Over the North Island, Auckland northwards sees patchy rain or drizzle, any early drizzle about the east coast clears then sunny spells
increase. Elsewhere there may be some brief morning light rain or drizzle then
clearing, skies remaining mostly cloudy.

About the South Island expect rain on the West Coast with heavy falls, especially north of Haast. Expect rain
for the top of the South Island with heavy rain moving in during the afternoon,
Canterbury sees cloudy skies with spits of rain at times. Otago has the odd
morning shower clear then overnight southerly quarter winds develop with
showers. Southland sees patchy rain or drizzle for much of the day with
southerlies gradually moving in.

On Wednesday the situation still has a low out to the west of the country with a high in the east, what starts to
complicate things is ex tropical cyclone Ita moves southwards later in the day
approaching the north of the North Island. Most in the North Island are looking
cloudy with northeasterly winds, patchy rain or drizzle with heavy falls about
the southwestern corner of the island. Heavy rain moves into Northland in the
evening, easterly quarter winds strengthen over the whole island
overnight.

The South Island has an increasing southeasterly airflow with periods of rain for most, the most persistent rain looks to be about inland Canterbury. Southland and Fiordland may remain dry with cloudy skies.

Thursday could be a wild one, what looks like ex tropical cyclone Ita will
sit just off the west coast of the North Island. Winds will be strong to gale
force from the easterly quarter for many, the hardest hit areas wind wise may be
from Wellington through to Taranaki along the southwestern corner of the North
Island. Rain about the upper North Island moves southwards during the day to lie
across the lower North Island in the evening, heavy falls look likely for many
though this will depend on the exact movement of the frontal system on the
day.

Finally on Friday conditions ease for most, ex tropical cyclone Ita moves southwards to lie west
of the South Island. The North Island sees sunny spells and isolated showers for
many, especially in the afternoon where there could be a heavy fall or two. On
the east coast the weather may come out mostly sunny after morning rain clears.
The South Island stays cloudy with heavy rain north of Westport in the west,
about the top of the South Island and down through to Canterbury easing in the
morning. Coastal Otago sees rain for much of the day while inland areas are more
patchy. Once again, Southland and Otago remain dry with high cloud. 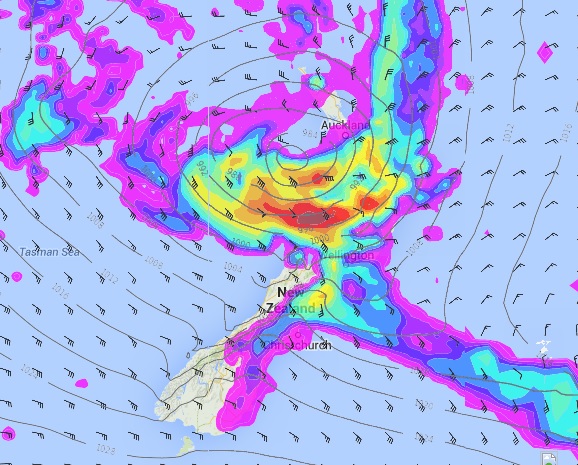 What are we looking at in regard to Kapiti, When Luci came through and crossed over the top of the south island we got 100kmh gusts. Are we looking at something similar.

Kapiti looks like it could well get strong to gale southeasterly winds, with speeds you mention not out of the question. Expect rain also, rain may just keep away from being heavy but it is possible.

Conditions then ease in the evening.

Strong to gale southeasterly winds look quite possible about Nelson on Thursday, and it may be a little earlier now (midday rather then from evening).

Hi Aaron, It does look nasty for probably Thursday mainly. On the bright side the system will move quickly which helps.

The following week looks quite promising at this stage as well so that will dry up the possible flooding I guess.