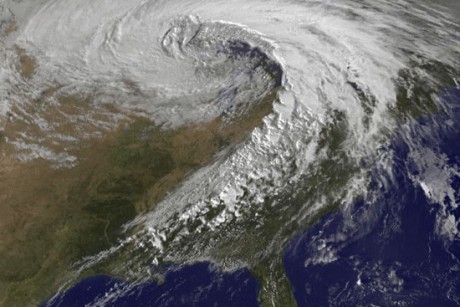 We know what it did to us, but what is it?  Why is it called a “weather bomb”?  Are storms like this called “weather bombs” elsewhere in the world?  Are there weather bombs that are famous?

A weather bomb, also called a cyclone bomb or sometimes just “bomb” is a rapidly deepening area of low pressure.  To qualify as a “bomb”, the central pressure needs to fall at least 24 hPa (hectopascals) in 24 hours.  That is a very rapid pressure drop.

These lows usually form out over open water.  But they can form over land too.  Like the continental United States.  The reason why I mention that is because some world famous bombs have affected the United States.  One even inspired a famous song.  More on that in a minute.

They form when an extratropical cyclone gets a kick of energy from upper levels winds and has fuel to burn in the form of a sharp difference between cold and warm air.  When all these ingredients come together in just the right amount, the cyclone goes through explosive deepening.   The more it deepens, the faster the air swirls.  The faster the air swirls around the centre of the low, the higher the wind speeds.

The whole process is called “cyclogenesis”.  That term can actually be applied to any cyclone or low.  So, the process of a weather bomb developing is called “bombogenesis”.  It’s the same process as cyclogenesis, just a lot more intense.

The term “weather bomb” is not exclusive to New Zealand.  It’s used in many places around the world.  Although, not always in such a high profile fashion.

In fact, when I was doing TV weather in the United States, I was told in no uncertain terms that the use of the name “bomb” was a bad idea.  It is rare you will hear a US TV meteorologist use that term.  Often, a term like “Land Hurricane” is used.  A special type of bomb in the US is called a “Nor’easter”.

You read that right; in the US, a “Nor’easter” almost always refers to a big storm.  Not a northeast wind.

As far world famous bombs go, there are two very famous storms.  One was in 1993, and it was indeed a “Nor’easter”.  It was a low that bombed out and slid up the east coast of the United States.  Because this happened in March, when it is still cold in the US, this ended up being a major snowstorm.  For two days, it pummelled the eastern seaboard.  Some locations got over 100cm of snow.  In addition, it spawned 11 tornadoes.  It produced winds approaching 160 km/h.  310 people were killed.

The other world famous bomb had a song written because of it.  In November 1975, a bomb struck the Great Lakes region of the United States causing a freighter to sink to the bottom of Lake Superior.  The storm bombed out so rapidly, that few were prepared for it.   All 29 people on board that ship died.

Hi Howard
Your description above certainly explains these events. Can you recall the weather we had on the date above. The wind came out of the south east for nearly two days. I believe a wind recorder out in the Hauraki Gulf gave up at about 180 kph. We in lower Northland recorded 393 mils for the month. I dont recall from what direction this storm came from. Do the records show this storm as being a similar event?

Excellent article on this subject as usual. Very informative & interesting. Thank you.

You’re welcome!  Thank you for your kind words.

Did this guy predict the latest tornados based on these observations?

Hi, and thanks for the excellent article.

Here is a couple of Wikipedia links.

Thank you for your compliment and comments.

And yes, you are right.  The movie was indeed made about the 1991 Halloween Nor’easter.  Not the March 1993 Nor’easter.  I’ve never seen the movie, so I probably should’ve read the synopsis a little more closely.

Thank you for catching that.