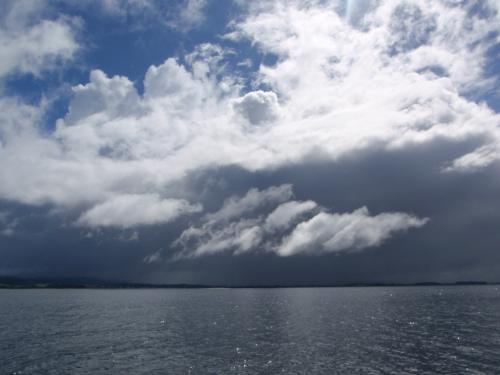 The slow moving but active weather system around New Zealand this week will continue into the weekend predict WeatherWatch.co.nz forecasters.

A low – which has been lying west of Auckland for the past four days – will linger another 24 hours before crossing the North Island and falling apart during Thursday.  This low could bring more thunderstorms and heavy downpours to northern and western New Zealand across Wednesday afternoon and Thursday.

By Friday the cool southerly flow which has been affecting the South Island’s east coast and Wellington will spread across the rest of the country.

The weekend, however, is a little more complicated.

On Saturday a large high from the southern Tasman Sea/Southern Ocean will spread into Southland and Otago but will be centred just south of Stewart Island.  In the North Island on Saturday pockets of low pressure look likely to form on either side of the island, indicating unstable weather conditions and increasing the chance of showers and cloud, mixed in with long sunny spells for most places.

Sunday is similar, with the high now centred just east of Dunedin and bringing mainly settled weather to the South Island – but a new low in the Tasman Sea and a shallow low near the North Island could see more showers popping up for northerners.

The problem with this forecast is the difficulty of accurately pinpointing where the showers will be exactly – but at this stage the data seems to support more shower activity in north eastern areas, such as Bay of Plenty and Gisborne.  Isolated showers, however, could pop up almost anywhere over the North Island.

We’ll have a better idea by Friday as to where those showers might be this weekend and what this new Tasman Sea low next week will bring to the country.

All of these Lows have worked out very well for us in the deep south with no rain in the last 7 days and generally fine days.