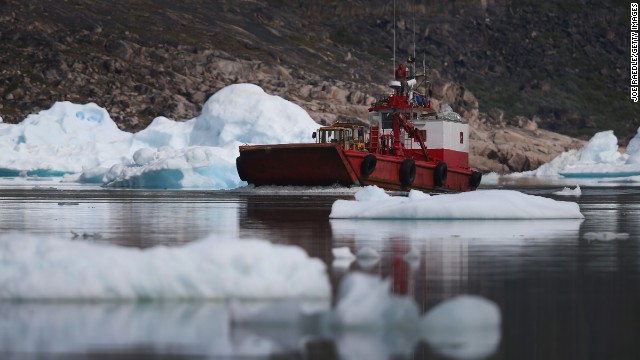 The world’s getting hotter, the sea’s rising and there’s increasing evidence neither are naturally occurring phenomena.

So says a report from the U.N. International Panel on Climate Change, a document released every six years that is considered the benchmark on the topic. More than 800 authors and 50 editors from dozens of countries took part in its creation.

The summary for policymakers was released early Friday, while the full report, which bills itself as “a comprehensive assessment of the physical science basis of climate change,” will be distributed Monday. Other reports, including those dealing with vulnerability and mitigation, will be released next year.

Here are the highlights from Friday’s summary:

Climate scientists are 95% confident — that is to say, surer than ever — that humans are responsible for at least “half of the observed increase in global average surface temperatures since the 1950s.”

This is the major headline from the report, as it marks a stark spike in confidence over the last 12 years, as scientists were 90% confident in 2007 and 66% confident in 2001 of the same conclusion.

An increase in carbon dioxide concentrations that is “unprecedented” in the last 20,000 years, along with increases in other emissions, have driven up average temperatures by about 0.6 degrees Celsius (1 degree Fahrenheit) since 1950, the report states.

Worst-case predictions are that by 2100, temperatures could increase by as much as 3.7 degrees Celsius (6.6 Fahrenheit), the report says.

Since 1950 we’ve seen a dramatic increase in extreme weather. This is especially true of record heat and heavier precipitation events.

While it’s difficult to determine the exact role climate change plays in an individual event, such as Hurricane Sandy or the EF-5 tornado that struck Moore, Oklahoma, because there are so many ingredients necessary to brew a single storm, the links are clearer when you look at overall patterns.

According to a study released this month in the Bulletin of the American Meteorological Society, scientists found strong links between global warming and extreme weather around the globe in 2012.

According to a paper in the journal Nature, this year, weather events that have previously been classified as “storms of the century” could become the storm of “every 20 years or less.”

While the last 15 years have not warmed as quickly, we’ve seen steady warming over most of the globe, and we haven’t seen a below-average temperature month since February 1985.

Scientists are also 99% certain that we will see more hot days and nights — and fewer chilly ones — as the 21st century progresses.

“Each of the last three decades has been significantly warmer than all preceding decades since 1850,” according to the IPCC report.

Scientists are 99% sure that sea level rise has accelerated over the last 2 centuries at a rate higher than at any time in the last 2,000 years.

They’re also highly confident that if the global surface temperature increases by more than 2 degrees Celsius over present temperatures we could see “a nearly ice-free Arctic Ocean in late summer.”

The report further notes that there is increasing evidence that ice sheets are losing mass, glaciers are shrinking, Arctic sea ice cover is diminishing, snow cover is decreasing and permafrost is thawing in the Northern Hemisphere.

As for the rise in sea level, scientists asserted in the IPCC report that tide gauges and satellite data make it “unequivocal” that the world’s mean sea level is on the upswing.

Even if we end emission tomorrow, climate change could continue for centuries

This may be one of the more harrowing findings in the report, as it suggests we’re too far gone to effect any meaningful change in our lifetimes.

Even if we end carbon dioxide emissions today, effects could linger for hundreds, if not thousands, of years. And certain changes may already be irreversible.

“Many aspects of climate change will persist for centuries even if concentrations of greenhouse gases are stabilized. This represents a multicentury commitment created by human activities today,” the report states.

The World getting hotter, the seas rising and somehow mankind is responsible? – claim the IPCC Climate panel doing the dirty work of the U.N. which promotes abortion, contraception and population control, and looks to take control of the decision making for every country on the planet… U.N. former Secretary U.Thant praised the Communist Lenin as a man whose “ideals” were reflected in the U.N. Charter. The U.N. has been described as originating from the “pit of Hell”

The world is not getting hotter, or colder, for that matter anymore than it has been doing for 1000s of years.

The Antarctic ice sheet is growing, not melting. The Arctic floating sea ice is 3 metres thick, fluctuates in extent and thickness as climate swings from warm to cold, in roughly 30 year cycles, so that around 1420 sailors could navigate through parts that are presently ice bound.

Sea level is rising 7 inches per century, not the 20 feet the climate alarmists are claiming.

Snowfall is not below normal. Four of the past five years have set snowfall records.

CO2 cannot cause global warming – concentrations are too low at 4 ppm ( 0.04%) and forecast rises by the end of the century to 7ppm (0.07%) are hardly catastrophic!

Climate is not constant and has varied between warm and cold with a roughly 30 year time span between each period, and in the past 500 years there have been 20 warm/cold periods identified which cannot be caused by CO2, but by natural causes – not man-made!

it looks like more people are going to believe more bogus evidence to enhance the sham of “Global warming”/ climate change. I see the Marshall Isands wanted money to help them stop the water from rising!!! And the ETS scheme??? How has that helped anyone except the instigators who wanted like Al Gore to make money out of it. New Zealand’s ETS scheme is stuffed. What’s a carbon credit worth these days? Oh, haven’t you heard about it lately? I wonder why?
95% sure, yeah right!!