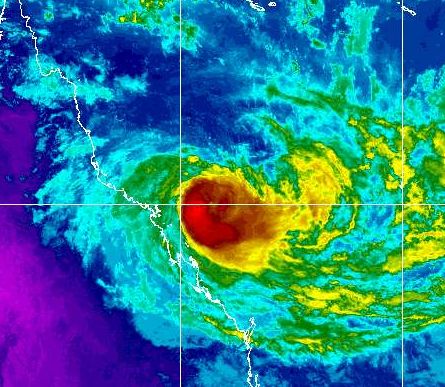 Cyclone Ului has been downgraded to a tropical low as the system moves inland in north Queensland.

It crossed the coast as a category three cyclone early this morning near Airlie Beach, north of Mackay, before steadily losing strength.

The State Emergency Service (SES) has responded to about 600 calls for help across the cyclone region.

There are no reports of injuries.

About 60,000 homes were blacked out across the region at the height of the cyclone.

Ergon Energy says the main high voltage line into Bowen, south of Townsville, may have been affected.

Ms Bligh says she plans to travel to the region sometime today if airports reopen.

She says it is too soon to gauge the full extent of the damage.

“This cyclone crossed the Queensland coast about six hours ago – it is still causing a very serious weather event in and around the region, so we could be seeing more damage as we speak,” she said.

“This is not over yet and making any estimate of the damage will take several days.”

“Flooding was a major concern yesterday – I think we’ve dodged a bullet with that,” he said.

“There has been very significant rainfall – over 400 millimetres in the Finch Hatton area, but fortunately that rain has not fallen in the major catchments.

“We were concerned about the Don River into Bowen, and the Pioneer River into Mackay.”

A spokeswoman for Mackay Airport Limited says crews are currently assessing the damage to the facility but the terminal is expected to reopen early this afternoon.

The Whitsunday coast airport near Proserpine is open, but Virgin Blue has cancelled their flights into the region.

A council spokeswoman says Jetstar is still planning to fly into Proserpine late this afternoon.

Damage in nearby Proserpine is widespread, with SES crews in the town helping to secure cyclone-damaged homes.

At least six homes lost their roofs in Proserpine and several streets have been blocked by fallen trees.

Sugar cane crops have been flattened.

A caller to ABC Local Radio says a caravan park in Proserpine where she is staying was hit hard.

“I’ve had a massive tree branch just missing the rear of my car and another one miss the side of my car,” she said.

“The neighbour directly next to me has totally lost his annex – it’s disappeared.

“Another gentleman’s lost the roof off his bus. There’s trees down – it’s just an absolute disaster area.”

Proserpine resident Clarry VanDerwolf says the wind reached its peak at about 1am AEST and peeled the corrugated iron roof off his home.

“When we heard the roof rolling across and water started running through the roof, the ceiling, it’s time to get out of here,” he said.

Islands in the Whitsundays were hit by gale force winds.

Hamilton Island spokeswoman Jill Collins says no-one was hurt and there does not appear to be any damage to boats at the marina.

“We had pretty severe weather conditions on the island, very strong winds, gusts of over 200-kilometres-an-hour and quite a bit of rain,” she said.

“But I’m very happy to report this morning that all of our guests and our staff and our residents are all safe.”

Ms Collins says there will be no flights into or out of the island today.

“We’re looking at having the airport open tomorrow for flights coming in and out as scheduled,” she said.

“The only other thing is we’re waiting on Fantasea right now to let us know when the ferry services will commence.”

“What we’ve got is a lot of people that seem to be out sightseeing at the moment,” he said.

“There doesn’t seem to be any real cause for them to be moving around and what we’re really asking is for people is that they remain indoors until the wind dies off and until we can get the roads cleared.

“If they’ve got no real urgent reason to be out there, we just strongly urge them to stay at home.”

Steve De Pinto, from the Queensland Fire and Rescue Service, says authorities are disappointed by the actions of a truck driver south of Mackay.

“We had the report of a person trapped in the cabin of his truck, that a tree had fallen on it,” he said.

“When we got there the person wasn’t trapped at all and he just wanted the tree off.

“So I hope they don’t make any calls that aren’t urgent because we certainly didn’t need to drive down there and try and avoid power wires etc.”

Townsville weather bureau forecaster Andrew Cearns says most of the heavy rain has been to the south of the system.

“Bowen really hasn’t received too much rain but some moderate falls through there,” he said.

“There’s been a bit of flooding in the Don River, so more to the south-west of Bowen they’ve had some heavier rain.

“Certainly down towards Mackay they’ve had heavy rain overnight so some flooding in the Pioneer River as well.”