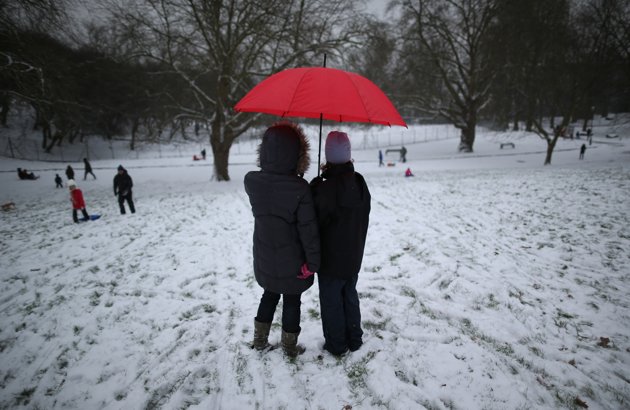 Britain’s weather has excelled itself recently.

It produced an Easter Sunday that was the coldest on record in the UK. Temperatures stuck below zero in many regions; freezing conditions continued to disrupt transport; and experts warned of increasing threats to animals and birds already struggling to survive loss of habitat and climate change. The start of British Summer Time last a couple of weekends back was marked in Braemar by temperatures that fell to -11C. For good measure, an unappetising rest of April looks likely to follow this misery.

The persistence of the spring’s grim weather is particularly striking for it comes after a series of other extreme meteorological events in recent years. Last winter, a severe drought triggered stern warnings by the Environment Agency that water rationing and hosepipe bans would soon have to be introduced – until several months of torrential rain produced widespread flooding.

Our weather, always unpredictable, is now fluctuating on a grand scale and becoming increasingly hard to forecast long-term. The challenge for meteorologists is to explain these unexpected outbreaks of climatic unpleasantness.

“There is no doubt that the recent weather has been highly changeable – on both sides of the Atlantic,” said meteorologist Nicholas Klingaman of Reading University. “We have blizzards and flooding. America has had droughts and scorching temperatures.”

Nor is it difficult to pinpoint the immediate cause, Klingaman said. The problem lies with the jet stream, a narrow band of strong winds that sweeps round the planet between the tropics and the Arctic. “Its behaviour has changed dramatically in the past few years and has produced these lengthy bouts of extreme weather. The real question, of course, is an obvious one: why has the jet stream changed its behaviour?”

The answer is very worrying, for it transpires that meteorologists may find it increasingly hard to make long-term assessments of future weather with their former confidence. The planet’s weather systems are being stirred and shaken and the cause is closely linked to climate change, the result of the trillions of tonnes of carbon that we have been pumping into our atmosphere.

The jet stream gets its name because its circulates at an altitude of around 10km to 15km, the height at which most jet planes fly. It runs from west to east, a feature that can give aircraft significant boosts on eastbound flights across the Atlantic and Pacific. However, in recent years this giant river of air has begun to meander and to slow down, trapping regions of high or low pressure over the same part of the globe, including the freezing air that has hung over Britain for the last six weeks. As to the reason for this change in the jet stream’s flow, more and more meteorologists now point to global warming. In particular, they pinpoint the most dramatic manifestation of climate change on the planet today – the warming of the Arctic – as the most likely culprit for the destabilising weather patterns we have been experiencing.

“The Arctic is warming faster than any other place on Earth,” said meteorologist Jennifer Francis of Rutgers University, New Jersey. “Arctic temperatures have increased at more than twice the global rate. You can see this in the sea ice in summer there. In just the three decades, it has declined by 40%. About 1.3m square miles of sea ice have disappeared. That is an astonishing amount of ice to lose and it shows just how much heating is going on up there. More to the point, that warming is now changing weather patterns across the northern hemisphere.”

Until recently, this mighty stream of air flew round the planet, in a slightly wavy path, between 30 and 60 degrees north. However, times are changing – and so is our atmosphere.

“The trouble is that the gradient between the atmosphere in the lower latitudes and in the Arctic is being disrupted by global warming,” said Francis.

The effects of this meandering are now being felt. As the jet stream slows, weather patterns tend to stick where they are for longer. In addition, the modest waves in the stream have increased in amplitude so that they curve north and south more frequently, bringing more weather systems northwards and southwards. Hence the cold conditions that have been brought south over Britain and which have persisted for so long.

Most scientists believe the link between rising Arctic temperatures and the resulting disruption of the jet stream is the most convincing explanation for the increased bouts of extreme weather in the northern hemisphere. However, some sound notes of caution. “I think the link between Arctic warming and weather disruption is convincing but it is not the only possible explanation,” said Klingaman.

“For example, there is a phenomenon known as the Madden-Julian oscillation which controls how rainfall is distributed around the tropics on a weekly and monthly basis and it has been shown to influence the position of the jet streams. It is possible this oscillation may been involved in some way in our changing weather patterns.”

Professor Piers Forster of Leeds University also urged caution. “I think it is too early to say that climate change is definitely involved in all the extreme weather events we have seen. The evidence suggests it might well be but we need more studies to confirm the link.”

But Francis said she was confident of the link.

“The droughts, heatwaves and freezing weather of recent years are just the types of phenomena that are expected to occur more frequently as the world continues to warm and the Arctic continues to lose its ice,” she said.