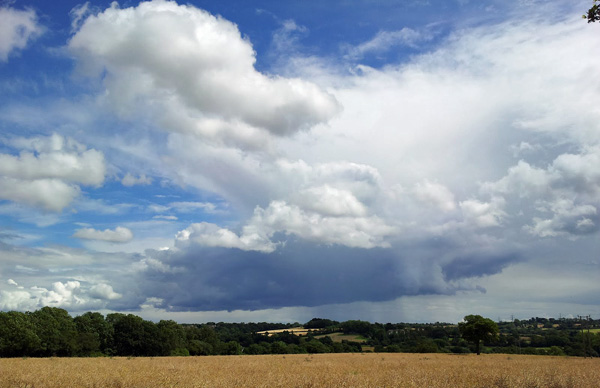 Column by UK Correspondent Kris Surtees – Hello again from a sunny and settled UK…that doesn’t quite tell the whole story, but thats the picture outside of my window right now, not a cloud in the sky, and temperatures around 15-16c – rather tropical feeling compared to the bitter cold of March.

Last Sunday offered the first BBQ opportunity of the year (often the best measurable index for the quality of UK weather!) for Southern and Eastern parts of the UK, with long sunny spells and temperatures up to highs of 22c at Manston in Kent. Unfortunately, those further North and West were left wondering what all the fuss was about, with cloudy skies, rain, and gale force winds!

The dry settled weather proved short-lived, and after another nice day on Monday for Easter districts of England, the unsettled and showers conditions that had plagued Northern and Western parts moved across the whole of the UK, giving cooler temperatures once again, though still pleasant in comparison to the preceding weeks.
The good news is that a ridge of high pressure has built northwards once again this weekend, offering some unbroken blue skies for much of England, though the sunshine coming just in spells across Wales, Scotland and Northern Ireland.

The outlook for the next 10 days or so is very changeable. Southern and Eastern parts should remain mostly dry for much of the new working week, though some weak frontal systems are likely to introduce more in the way of cloud and rain once again to Northern and Western parts of the UK. We could well see temperatures approaching 20c towards midweek in South-East England once again. However, this weekends high pressure, whilst delivering some warm days, has brought some overnight ground frosts – serving a reminder that there is still plenty of colder air at this time of year across the Northern Hemisphere, despite the strengthening sun.
And as we head towards next weekend, current indications are that the winds will switch around to a Northerly direction giving some more unsettled and much cooler conditions to the whole of the UK, with the risk of snowfall, across Scotland in particular, returning once again.

So, glimpses of both summer and potentially winter to come through the course of this week. As ever in the UK, the weather provides plenty to talk about and many surprises!