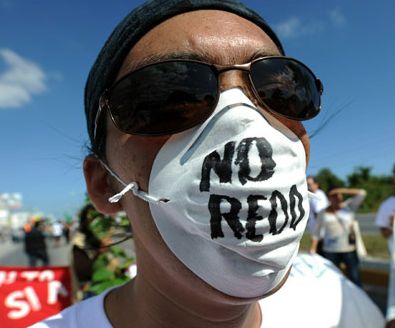 As talks at the United Nations climate summit enter their final hours, hopes of progress on key issues including the REDD+ (Reducing Emissions from Deforestation and Forest Degradation) program appear to be fading.

Despite an upbeat prognosis from the executive director of the U.N. Environment Program Achim Steiner, agreement on the finer detail of the proposals — namely rules concerning safeguards, finance and the program’s scope — have thus far proved much more elusive.

He says REDD+ has been the one area where the “greatest consensus” has been achieved.

“What we are seeing is that a number of safeguards are being built into the draft agreement, not only in the transparency of the funds being used, but also with social and environmental safeguards,” Steiner told CNN.

But a number of countries don’t share Steiner’s enthusiasm for the draft text.

Launched in September 2008, REDD+ is an attempt to “put a financial value on the carbon stored in forests, offering incentives for developing countries to reduce emissions from forested lands,” says the U.N.

A pilot scheme has already approved funds over $50 million to 12 developing countries — including Indonesia, Tanzania and Bolivia.

Rainforest destruction contributes around one fifth of total global emissions every year, according to the U.N.

Morales also has the backing La Via Campesina — an international organization representing peasant farmers — who he addressed on Thursday at their alternative climate change conference — the Forum for the Life, Climate and Social Justice — which is taking place alongside official talks in Cancun.

Furthermore, the Bolivian leaders’ concerns are shared by the Rainforest Foundation and Friends of the Earth who worry that the draft agreement will not uphold the rights of indigenous rural populations.

Simon Counsell, executive director of the Rainforest Foundation says Bolivia is one of the few countries taking a principled stand.

“They genuinely seem to want REDD+ to work for the right purposes. They want to do it on the basis that natural forests are protected and that the rights of indigenous peoples are protected. They don’t want REDD+ to be included in global carbon markets, as they think that this presents dangers to the world as a whole,” Counsell said.

Steiner says it’s an issue he is “extremely conscious” of and one which will put REDD+ to the test.

“What we do not want see is forests and ecosystems are turned in some kind of real estate which results in an adverse effect on local communities and businesses,” Steiner said.

“We are trying to put in the conditions that will ensure indigenous peoples’ rights are recognized but more importantly their continued engagement, benefit and ability to be custodians of the forests is not undermined by REDD+.”

Counsell says some of the tropical forest countries are arguing for money without any strings attached.

“In fact, they’ve been successful in arguing that there shouldn’t be any safeguards to prevent them using this REDD+ money for things that might even destroy more tropical forests. I think we are paying a really high price for our own failure to commit to reductions in domestic carbon emissions.”

Steiner admits that corruption is a concern but says it is not a reason to abandon the program.

“Yes, there is always a risk that funds can be misappropriated, but in overall terms I think REDD+ would actually achieve the opposite and make corruption much more difficult,” he said.

But hopes of agreeing a way forward to preserve the world’s rainforests look bleak, as do the prospects for other key aspects of negotiations.

Talks on the “Green Fund” which aims to distribute funds to developing nations to help them with climate change impacts and mitigation also appear to have stalled.

But details of how the fund might be run and who controls it, which were meant to decided in Cancun, have not been agreed going into the final day.

And, delegates have also yet to decide on a potential successor to the Kyoto Protocol which expires in 2012.

Japan, Russia and Canada have so far refused to sign up to an extension to the protocol — adopted in 1997 — which sets targets for 37 industrialized countries, plus the European Union, to reduce their greenhouse gas emissions.