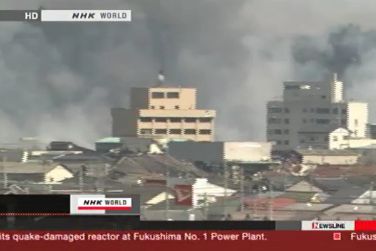 U.N. nuclear experts gave a thumbs-up to Japan’s planned “stress tests” for its remaining nuclear power plants Tuesday but left Japanese authorities to decide whether the plants themselves are safe.

A team from the International Atomic Energy Agency spent the past week studying the nuclear safety reviews Tokyo ordered after last year’s meltdowns at the Fukushima Daiichi power plant.

They also toured the Ohi plant on Japan’s west coast, the first to have completed the government’s regimen tests aimed at predicting how the facilities would cope with natural disasters.

The IAEA team recommended Japanese regulators improve communication with the residents around the plants and address plans for dealing with severe accidents more comprehensively in the wake of the worst nuclear accident since Chernobyl.

Nuclear power provided about a third of Japan’s electricity before the Fukushima Daiichi accident, which was triggered by the historic earthquake and tsunami that struck Japan in March. The disaster triggered a widespread rethinking of the industry, and all but three of Japan’s 17 nuclear plants have been taken offline since then.

The three operating reactors at Fukushima Daiichi suffered meltdowns when the tsunami knocked out coolant systems at the plant, about 240 kilometers (150 miles) north of Tokyo.

About 110,000 people remain displaced from homes as far away as 40 kilometers (25 miles) from the plant, and a government report in January criticized both the plant’s owner and the Japanese government for their handling of the accident.

Poorly trained plant operators misread a key backup system and waited too long to start pumping water into the units, the commission set up to probe the disaster concluded.

It found neither plant owner Tokyo Electric Power nor government regulators prepared for the chance that a tsunami could trigger a nuclear disaster and criticized both for giving the public only vague, delayed information as the crisis unfolded.