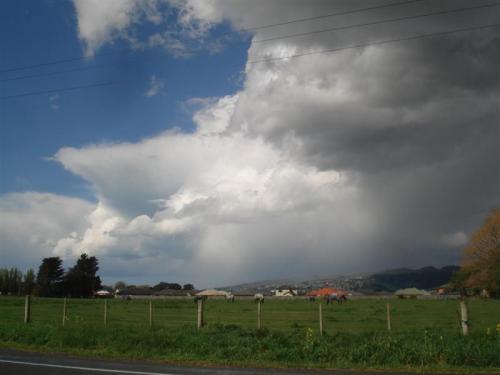 Highs in the low 20s, sunshine, heavy rain, thunderstorms, wind and a wintry spell make up the weather conditions across New Zealand over the next 14 days – a typical spring forecast say WeatherWatch.co.nz forecasters.

As we head into the second month of Spring we can expect weather forecasts like this to be the norm.

The warm weather should affect most of the country during Friday and Saturday as a north west flow which comes from Australia’s interior pushes over us.

On Saturday an active front will bring heavy rain to western parts of New Zealand and possibly northern areas too.  This front, with warm air in front of it and colder sou’westers behind it, is expected to generate isolated thunderstorms along the entire western coastline as it crosses New Zealand on Saturday.

Early next week a new Tasman Sea low will cross the country and behind it will be a colder southerly which could bring a spell of more wintry conditions, especially to southern and eastern sides of both islands around the middle of the week.

After that cold snap another high rolls in – this one will move in from the southern Tasman Sea and head towards the North Island – keeping the south west flow alive a little longer for South Islanders.

Warmer weather is predicted to return as the high departs in the second week of October – which may well bring in heavy rain to the West Coast again.  We’ll keep you posted!