Typhoon Muifa is set to bring gusty winds and rainfall to coastal areas of China late Saturday or on Sunday, after drenching the southern Japanese island of Okinawa.

The typhoon — the ninth to hit China this year — is headed for Zhejiang and Jiangsu provinces, Xinhua News Agency reported.

The storm is expected to be east of the city of Shanghai, a major business and banking center, within the next 12 to 24 hours, CNN meteorologists say.

However, the typhoon will be weaker and less organized than it was previously.

Weak winds near the typhoon’s center will be around 130-140 kph (81-87 mph), according to their forecast, but in Shanghai probably more like 60 to 80 kph (37-50 mph). Rain and gusty winds will reach the city, but the typhoon is not expected to make landfall there.

Eastern coastal areas can expect high winds over the next three days, Xinhua says, and parts of Zhejiang, Jiangsu, Anhui, Shandong, Hebei and Liaoning provinces will be hit by torrential rain. 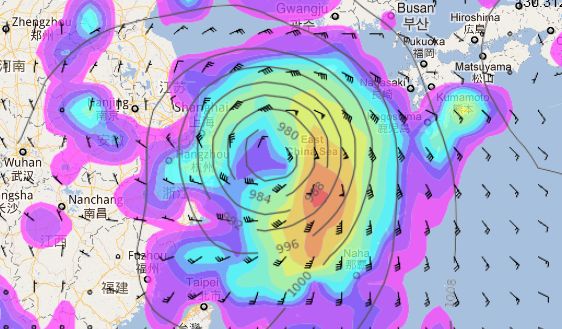 Muifa left Okinawa with almost a meter of rain.

Meanwhile, scorching heat is expected to linger in southern regions of China over the next three days, Xinhua reported.

Areas that will be affected include Jiangxi, Fujian, and Guangdong provinces, and Guangxi Zhuang Autonomous Region on Saturday, Xinhua said