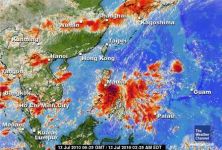 There is action in the tropics but it’s not in the Atlantic or the eastern Pacific.

Action is brewing in the western Pacific where Typhoon Conson has strengthened.

Typhoon Conson is gradually organizing as it moves west-northwest toward the northern Philippines. Conson was located about 390 miles east of Manila as of Tuesday afternoon (NZT).

In a little over a day (some time on Wednesday NZT), Conson is forecast to make landfall over the island of Luzon in the northern Philippines as a Category 1 typhoon. Damaging winds, flash flooding rains and mudslides are likely.

Originally published Dec 1 — We take a close look at the weather and climate trends for NZ across December,…