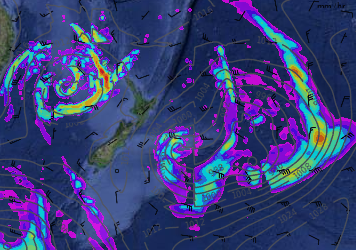 A large low pressure system is currently engulfing much of New Zealand with heavy downpours, gales in the north and squalls in the west.  While it’s certainly a rough day in the north the low will ease overnight and Tuesday will see lighter winds as the day progresses, especially in the South Island and the north by the end of the day.

However by Tuesday night those in Northland may already notice the next incoming low, with clouds developing and warmer northerlies returning.

In fact by Wednesday a sub-tropical flow returns to many northern areas. Isolated torrential downpours may cause localised flooding on Wednesday in the upper North Island – but it will be hit and miss with the bulk of the rain out at sea.

By Thursday the centre of this low may be just north of Northland but lower air pressure may still affect a big chunk of the North Island.  The South Island is mostly clear from this next low, although the upper South Island may see some rain on Thursday with east to south east winds.

WeatherWatch.co.nz forecasts that while the rest of June and first few days of July will likely be warmer than average a colder south to south west flow will dredge up colder sub-Antarctic air over the country for much of the first half of July bringing frosts back and snow showers into the mountains and ski-fields.

Its so far been an incredibly mild and fairly dry winter here so far in most of north/mid Canterbury. Do you see this very unusual weather pattern continuing or are we going to get some sort of semblance to winter in July and August?

The big issue is we just need some drenching rains for groundwater recharge and also just to get some subsoil moisture for the first time in over 2 years. I guess the big fear is that we are just slowly lurching towards another severe spring and summer drought again!!