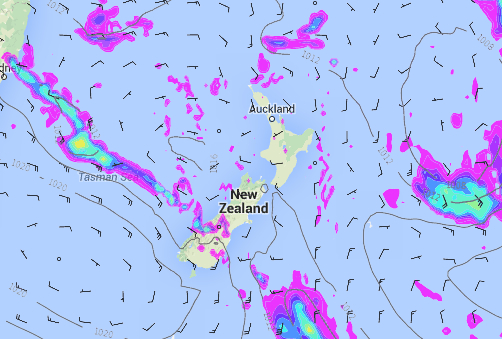 Two high systems out to our west are pulling easterlies across the top of the country, resulting in some completely different outlooks for the two islands on Thursday.

That cold front which dropped temperatures around the lower South Island will continue its march up the country, reaching the North Island and (hopefully) bringing showers to some parts of Waikato, Gisborne and Hawke’s Bay in the afternoon, though they won’t be particularly widespread, and some in the east may be fairly light – but plenty of farmers will have their fingers crossed – and there is the chance of an isolated heavy-ish downpour or two, especially around eastern Waikato and western BOP.

The rest of the North Island is looking at a warm day, with a mix of sun and cloud, and inland parts cooling down later at night.

For Southland, Central & Coastal Otago, and Canterbury, it’s looking like a mostly dry day but a few heavy showers may form inland later.

That shower activity will be hit and miss, but for a lucky few it could mean a solid downpour in some dry areas.

Wettest weather will be on the West Coast in the afternoon.

For northern parts of the South Island it’s shaping up to be mostly sunny, with only the small chance of a late shower in Neslon or Marlborough’s southern ranges.