Two highs and a low: Situation & outlook for Tuesday 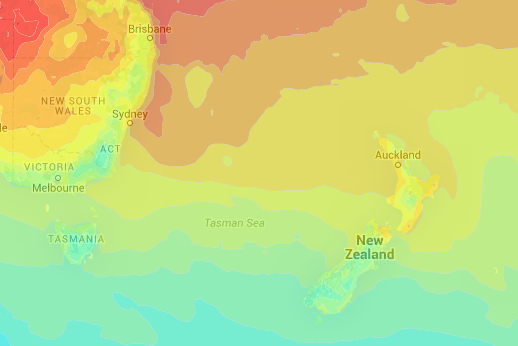 Tuesday’s situation is an interesting one – we have two areas of high pressure, one in the Tasman Sea west of the country, and the other out east in the Pacific.
All the while, a narrow trough of low pressure lies over the country between these two highs.

For most of the the South Island we see morning cloud on the east coast, though it will break to afternoon sunny areas, with northeast sea breezes.
Along the West Coast the weather is mostly sunny, and the winds will tend westerly.

Sunny in Nelson (of course), with light winds in the morning, switching to afternoon northerlies.
At the other end of the country it’s mostly sunny for Southland, along with south to southwesterly breezes.
Later in the evening, southerly winds will push into the east coast bringing increasing cloud, and some overnight drizzle from around Otago Peninsula northwards – through to around Banks Peninsula.

For the North Island, we are looking at morning cloud from the Waikato northwards, and the chance of a light shower too – then sunny areas will increase in the afternoon, along with west to southwest winds.

It’s looking mostly sunny elsewhere else, with light winds in the morning, switching to afternoon sea breezes.
About the ranges of Hawkes Bay, Gisborne, Bay Of Plenty, and also about eastern Waikato and eastern parts of the Central North Island we are looking at isolated showers late in the afternoon and into the evening, with the chance of a heavy fall and or thunderstorm.
So for farmers in the Waikato, particularly in the east (same goes for the CNI), there could be an isolated heavy fall later in the day.

These showers tend to be hit and miss – so not everyone will see rain.

The Waikato, inland Taranaki, western parts of the Central North Island, and Central Otago (especially Alexandra) and down through to the Manawatu look like the warmest places – seeing highâ€™s in the mid to late 20â€™s.