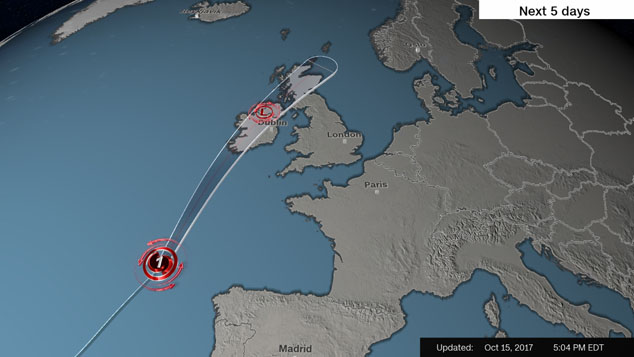 Three people have died in Ireland in accidents relating to Storm Ophelia as 100mph winds started to batter Ireland and Britain.

As Irish prime minister Leo Varadkar described the impact of Ophelia as a â€œnational emergencyâ€, the countryâ€™s schools and colleges were closed and the transport system was virtually at a standstill. Varadkar, appealing to people to remain indoors for their own safety, said it was the worst storm to hit Ireland in 50 years.

There were reports later on Monday afternoon that one more person was killed in the storm in an incident at Ravensdale, near Dundalk in Co.Louth close to the border with Northern Ireland.

With the bad weather spreading northeast across Ireland and parts of the UK, a woman in her 70s was killed in the Republic when a tree fell on her car near the village of Aglish in Waterford.

Later a man in his 30s died in a chainsaw accident in Cahir, County Tipperary, after trying to remove a tree brought down by the storm, police said. 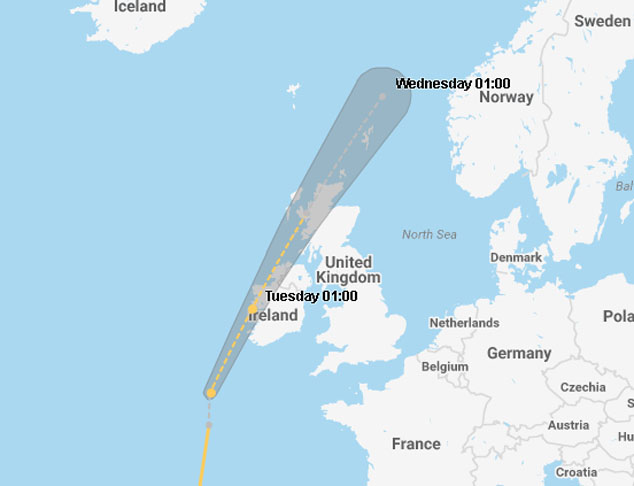 Referring to Storm Debbie in 1961, Leo Varadkar said: â€œThe last time we had a storm this severe, 11 lives were lost, so safety is our number one priority.â€

Speaking before an emergency meeting of the government in Dublin, he called on people to stay at home, stressing that the red weather warning applied to all cities and counties across Ireland.

Varadkar said the danger to the public would not end once the storm had passed, because there would be fallen trees and felled power lines across the country.

â€œStaff are ready to come in from Northern Ireland and Britain to assist in the coming days in restoring power. We can only restore the power lines when it is safe to do so,â€ he said.

The Irish foreign minister, Simon Coveney, speaking from his native Cork, one of the worst-affected parts of the country, said: â€œThis is a weather event the likes of which we have never seen before.â€

Coveney said the government had been briefed that the strong winds would whip up waves up to 40ft (12 metres) high and â€œtaller than a double-decker busâ€.

Met Ã‰ireann, the Irish weather service, said Ireland would bear the brunt of Ophelia for three to four hours on Monday. 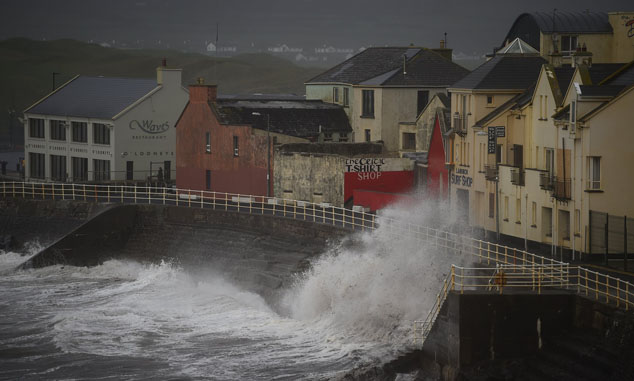 As the storm struck at about 10am, there were outages due to felled power lines in the south and south-west of the country. By lunchtime, about 100,000 customers were without power, according to the electricity supply board.

More than 140 flights from Irish airports were cancelled and by 10am, all Dublin Bus routes in the capital were shut down. The cityâ€™s Luas tram system was also closed over safety fears. Every creche, school, college and university in Ireland was closed.

All trains out of Dublinâ€™s Heuston station, which runs rail connections to the south and west of Ireland, have been cancelled.

Counties such as Clare, Cork and Kerry have so far suffered the worst effects of Ophelia. In West Cork, a funeral was postponed due to safety fears.

Kathryn Johnston had travelled from Ballymena in Northern Ireland to Galway on Irelandâ€™s Atlantic seaboard to attend her daughter Aliceâ€™s graduation. The storm led to the closure of the National University of Ireland Galway on Monday and the cancellation of the graduation ceremony.

â€œItâ€™s getting quite rough, the place around Spanish Arch was very windy and some of the businesses have floodgates up. Yet there are loads of tourists still milling about, which is bizarre,â€ she said.

Johnston said she and her daughter were angry that they had made the 260-mile trip only to find out at 7.30pm on Sunday that the graduation ceremony had been postponed.

In Northern Ireland, Bill Clintonâ€™s visit to Belfast was cancelled because of the storm. The former US president was due to meet political parties represented in the Stormont parliament to urge them to find a way to restore the power-sharing government.

All schools, colleges and universities in Northern Ireland have also been closed for the day. The lord chief justice of Northern Ireland, Sir Declan Morgan, ordered the closure of all courts by lunchtime.

The Met Office in Belfast warned that the storm will strike Northern Ireland from midday to almost midnight. It issued an amber warning, meaning Ophelia poses a risk to life.

The storm is expected to move across to Wales, northern England and Scotland through Monday.

Parts of Scotland and Wales have also been upgraded to amber.

Around 200 properties in Wales suffered power cuts, a number of schools closed early and the Cleddau Bridge was shut to high-sided vehicles, Pembrokeshire county council said.

Flood warnings are also in place along the Pembrokeshire coast, parts of west Scotland, north-west England and Cornwall.

Planes were grounded at Manchester airport, with 20 flights cancelled and passengers warned to check ahead before travelling to the airport.