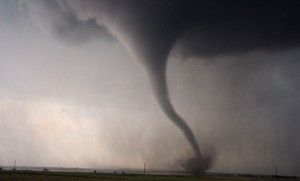 More tornadoes are arriving than have been seen for four decades, a scientist says.

Tornado expert Dr Richard Turner, of the National Institute of Water and Atmospheric Research, said more tornadoes had been reported over the past decade than during the 1980s and 1990s combined.

“We’re seeing more than we’ve seen for 40 years,” he writes in the latest edition of Niwa magazine Water and Atmosphere.

“We’re experiencing about the same frequency as occurred during the 50s and 60s.”

An average of seven to 10 moderate to strong tornadoes had been reported in recent years, and six people had been killed within the past nine years.

Auckland is hit by a tornado on average less than once a year, but there is much variation from year to year.

A tornado that ripped through Hobsonville last year killed Keith Langford, Brendon Johnson and Tom Stowers when they were crushed beneath concrete slabs at a construction site.

Another lethal tornado struck at Frankton, Hamilton, in 1948, carving a 100m to 200m swathe through the suburb and killing three people. It was ranked as an EF2 twister with winds between 150km/h and 200km/h.

Dr Turner said the history of tornadoes here had not been studied in detail and because many went unobserved it was difficult to identify trends and relate them to weather patterns such as La Nina or the Pacific Decadal Oscillation.

“For instance, damage caused by microburst winds is often wrongly attributed to a tornado. Taking this into account, there still does appear to be some trend on decadal timescales.”

Niwa was investigating high-resolution weather forecast models that could predict the occurrence of mesocyclones – or spinning updraughts of air in thunderstorms.

“If successful, this could potentially help forecasters identify mesocyclone formation between six and 12 hours in advance, increasing warning times.”

“So we’ve gone into the field to collect data about the sort of damage caused by tornadoes as well as different types of wind phenomena.”

The research would ultimately allow scientists to relate the damage and loss incurred to the likely range of wind speeds caused by a tornado such as that in Hobsonville.

An intense wind shift can be a warning of a tornado.

How frequent are tornadoes?

We have between seven and 10 significant tornadoes a year, but the annual average for Auckland is less than one. Niwa says the rate is climbing to a point we haven’t seen since the 1950s and 60s. Tornadoes in remote areas may go unreported.

How often are they deadly?

Fatal tornadoes are rare here, but recent strikes have claimed lives. Three people were killed by falling concrete slabs when a tornado hit Hobsonville in December last year, construction worker Benedict Dacayan was killed in Albany in May 2011, and two people were killed near Waitara in August 2004.

How do they form?

According to Niwa, most tornadoes here are linked with pre-frontal squall lines, or bands of thunderstorms embedded in a strong, unstable pre-frontal northwesterly flow. Strong updrafts can start to spin and a mesocyclone can form, which can then spawn tornadoes. Warning signs include hail or heavy rain followed by dead calm or an intense wind shift.

How are they different from the tornadoes seen in “Tornado Alley” in the United States?

Tornadoes over the plains of the US are far more common and more destructive than those seen here. The EF5 Moore Tornado in Oklahoma this year, which killed 23, had winds reaching 321km/h. Typical tornadoes here range between 115km/h and 180km/h.