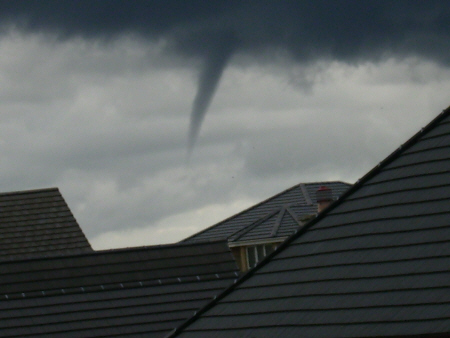 A Rahotu mum dived under her kitchen table thinking her home was being torn apart by an earthquake late yesterday afternoon.

But instead, her roof was being wrenched off by a tornado, the force lifting it into the air and dumping it 50m away in a paddock.

Her brother, who declined to be named, said that his sister, Kieran Taylor, was shocked but fortunately unharmed.

She was grateful that her three-year-old daughter was off at a Christmas party so was not at home when the twister hit.

The tornado, which came in from the sea during a series of fierce westerly squalls hitting coastal Taranaki yesterday, had first whipped past Ms Taylor’s nearby parents’ home on mid-Kahui Rd just before 6pm.

The force had come close enough to blow out all their windows, her brother said.

A racehorse in the front paddock was so spooked it had run into a fence and was still racing around with its nostrils flaring while about 20 volunteer firefighters from the Rahotu and Opunake brigades helped place tarpaulins over Ms Taylor’s home.

Rahotu fire chief, Paul Mundt, who lives just 200m further up Kahui Rd, revealed he too had a close call as he watched the debris flying past his home.

“I’d just sent the boy to get tea. It went straight beside me. I saw the rubbish in the air.”

The destructive force had lasted only a matter of minutes or even seconds, he said.

When it hit Ms Taylor’s roof it had “just peeled it off like a banana”, he said.

The tarpaulins used yesterday had come from the Opunake Fire Brigade where Civil Defence has ensured there was now a stock stored as a result of the increase in destructive tornados hitting Taranaki in the past three years, Mr Mundt said.

“We used a whole heap last time they went through,” Mr Mundt said.

“There’s been a lot more tornados. And we’re expecting a few more with climate change,” he said.

The tornados were a result of the mix of warm and cold air. “I think we’ve been getting more of that lately,” he said.

Rahotu’s last tornado callout had been on July 21 this year, he said.

And in 2007, when Taranaki came under attack from a swarm of tornados from New Plymouth to Hawera, three roofs were torn off and the area had been without power for two days.

Good on you mate for diving under your table, that was great idea.