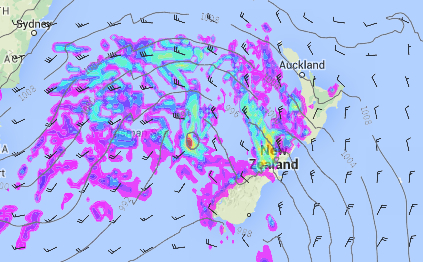 Right – get ready for a pretty rough ride, as several different weather systems are about to converge and interact over New Zealand – leading to some very interesting prospects.

A front moves across the North Island late morning and early afternoon, then passes off out to the east by late afternoon.
Ahead of the front, winds will be brisk from the north, and quite strong along the East Coast.
Then, as the front moves through, winds change westerly – and blow quite strongly for most, especially western North Island regions, where they may reach gale strength at times.

Auckland is looking at a moderate to high chance of thunderstorms as this unsettled front passes through.
The chance of a small tornado is about too, or any other kind of storm in the west in the late morning or around midday – but keep your eye on local wranings to stay up to date with that.

For the South Island, expect rain for Southland and Otago, which could bring a few heavy falls this morning – then easing this afternoon, as the rain pushes into Canterbury.
Yesterday our models seemed to show some heavy rain about, but now it doesn’t look as likely – though some reasonable falls still look on the cards.

A southwesterly change is the reason for the rain pushing northwards along the east coast of the South Island today, and winds about coastal Canterbury could be strong at times, especially for the likes of Banks Peninsula where gales are even possible.
The same goes for the coastal Kaikoura area.