Tuesday’s national forecast – wet for some, mild for most, dry in the north (+7 Maps) 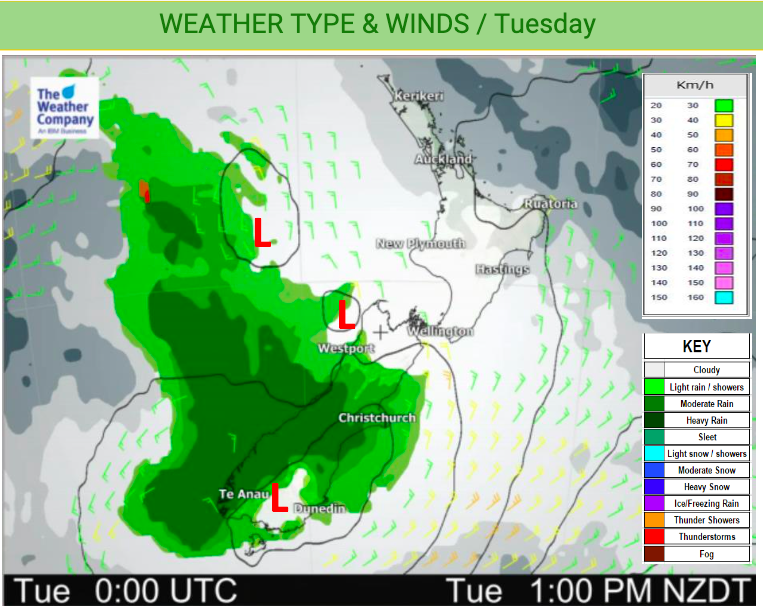 The nation is either average or warmer than average today.

Northland, Auckland, Waikato & Bay Of Plenty
A mix of sun and cloud with light northerlies or sea breezes, chance of a shower or two mainly about coastal parts in the morning then afternoon about Waikato and inland Bay Of Plenty.
Highs: 21-25

Western North Island (including Central North Island)
It may be dry first thing then some scattered rain develops during the morning, skies mostly cloudy. The odd sunny spell possible in the afternoon (mainly about Manawatu), becoming mainly dry in the evening.
Highs: 19-23

West Coast
Rain (possibly heavy) then easing to showers in the morning with sun breaking through as northeasterlies change westerly or southwest, mainly dry from afternoon but the odd shower may hang about till evening, especially inland about the ranges.
Highs: 19-22

Marlborough & Nelson
Some rain develops in the morning, easing from afternoon and sun starts to break through with northerly winds. Becoming dry by evening.
Highs: 20-23

Southland & Otago
Morning cloud then afternoon sunny spells, isolated showers too, especially in the afternoon about inland areas then easing later in the evening. Light winds tend to the south for most however easterly about coastal Otago.
Highs: 19-25