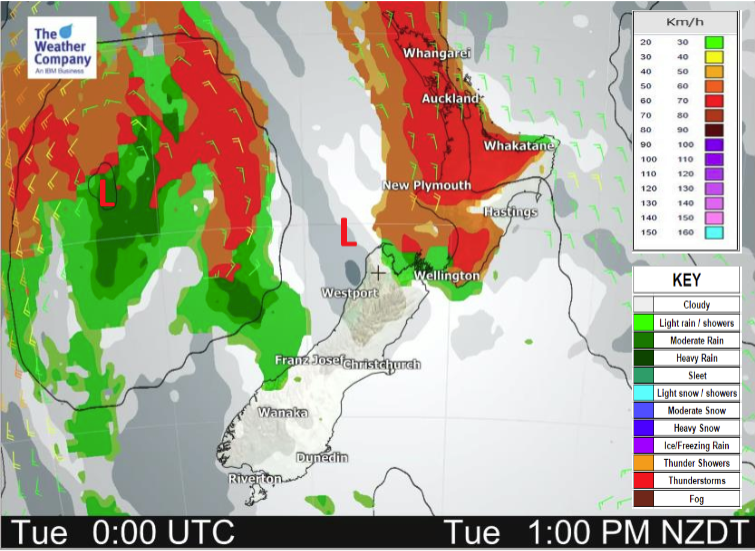 Unsettled for the North Island today in a northerly airflow with potential thunderstorms, conditions are tamer for the South Island but still quite cloudy.

Showers or rain with heavy falls for the North Island today especially in the west, rain is a little more scattered in the east. The South Island is a bit drier today but showers are still expected in the north this afternoon and for the West Coast, showers spread into inland parts of Southland and Otago from the northwest this afternoon.

Winds are not particularly strong today at all but could be a little breezy for the North Island this afternoon from the north.

Northland, Auckland, Waikato & Bay Of Plenty
Mostly cloudy with showers. Showers becoming heavy this afternoon and turning to rain with a chance of thunderstorms. North to northeasterly winds.
Highs: 23-24

Canterbury
Mostly cloudy, some morning drizzle then drying up. Sun may break through for a time in the afternoon. A few showers late afternoon / evening in the high country spreading from the west. A few showers may spread to the coast for a time. Easterlies.
Highs: 18-20

Southland & Otago
Mostly cloudy, some morning drizzle possible then clearing. This afternoon some rain or showers spreads in from the northwest for inland areas. Easterly quarter winds.
Highs: 17-20

Seems everyone got the forecast wrong – nothing came from the heavy rain and thunderstorm predicted for Auckland and northwards!

It was always going to be a fairly 50/50 set up, as it’s only a narrow risk area. It’s hard to be accurate when these thunderstorms are on the cusp of forming. It’s like putting popcorn in the microwave but only using half the energy to pop it… some kernels might pop, but it’s hard to predict which exact pieces of corn will pop! Similar toughness with the set up this week and which clouds will bubble up to a thunderstorm and which showers will just be the standard variety. Our weekday weather videos are useful at explaining (or dismissing) the risks.
Cheers
– WW