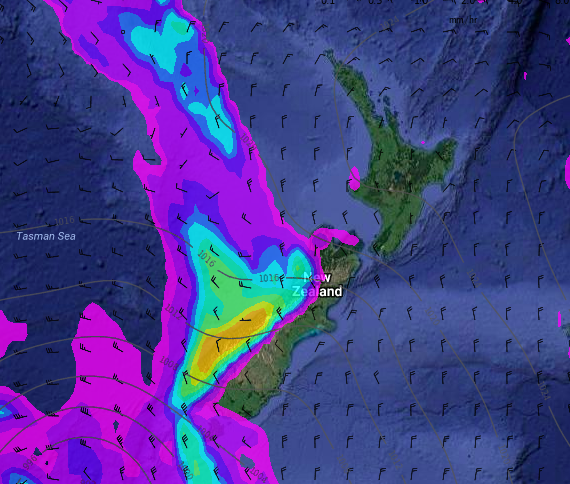 An active cold front moves up the West Coast of the South Island bringing heavy rain and possible thunderstorms, caused by a low nearby in the Southern Ocean. Nor’west winds associated with this front will push across the South Island and may reach gale force in some inland/exposed areas. Winds will be northerly quarter across the country with the strongest generally being from the nor’west direction.
WeatherWatch.co.nz says it will be sunniest in the east but warm in many parts of New Zealand with highs in the low to mid 20s across a number of South Island regions and highs into the late 20s and even near 30 for some parts of the North Island. (Wairoa in northern Hawke’s Bay may reach 28).
The North Island looks mostly dry but there will be a couple of showers.
Heavy rain from the West Coast front will reach Nelson by night time.

Northland, Auckland, Waikato & Bay Of Plenty
A mix of sun and cloud, may be an isolated shower otherwise dry. Mainly north to north east breezes.
Wind: NNE
Tonight’s Lows: 13 to 15
Highs: 23 to 26

Western North Island (including Central North Island)
A mix of sun and cloud. Mostly dry but there may be a shower. Winds picking up a little in some exposed areas from the north to north west. Fairly cool around the central volcanic mountains but most places in the low to mid 20s.
Wind: NNW
Tonight’s Lows: 6 to 16
Highs: 13 to 27

Marlborough & Nelson
Clouds building from the west as the day goes on with north to north west winds picking up. Late heavy rain for Nelson.
Wind: NNW
Tonight’s Lows: 13 or 14
Highs: 22 to 24

West Coast
Heavy rain and possible thunderstorms move up the West Coast across the day with northerly quarter winds eventually leaning westerly by the end of the day.
Wind: N
Tonight’s Lows: 14 or 15
High: 20 Canterbury
Mainly dry with northerly quarter winds a little blustery in places. May reach gale force from the NW direction inland in some exposed areas.
Wind: N
Tonight’s Lows: 8 to 10
Highs: 17 to 20

Southland & Otago
Sunny in the east but high cloud thickens at times. Some areas may become overcast with the chance of a few spits of rain spilling over from the far west. Mild Northerly quarter winds with NW winds may reach gale force in some inland exposed areas around the mountains and ranges.
Wind: NW
Tonight’s Lows: 12 to 16
Highs: 18 to 24
– 1pm Tuesday air pressure and rain map / Weathermap.co.nz
– WeatherWatch.co.nz