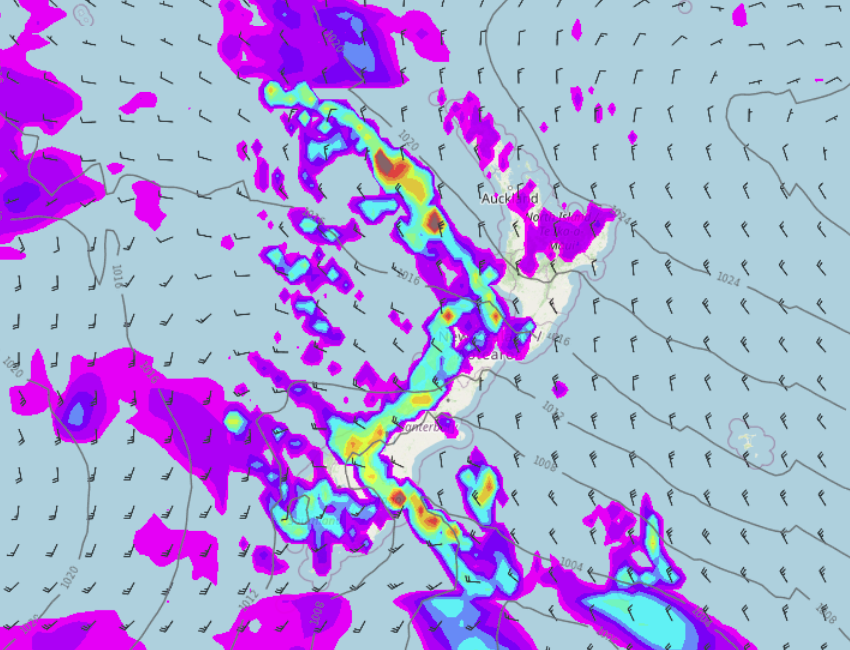 A northwesterly airflow lies over New Zealand today meanwhile a cold front moves into the lower South Island this morning, it pushes northwards to reach the lower North Island overnight.

There will be some wet weather in some form for western regions today, heaviest about the West Coast. As a cold front moves northwards it brings rain pushing up the eastern side of the South Island. Some snow will arrive with this cold front, more details in the forecasts below.

Expect a warm day for eastern regions but invariably as the cold front moves northwards it will make those temperatures drop.

Western North Island (including Central North Island)
Mostly cloudy, there may be a shower, more so about Taranaki and Kapiti. In the afternoon showers becoming more widespread or perhaps some rain moving in for the aforementioned areas then becoming widespread this evening. Humid northwesterlies.
Highs: 16-21

Wellington
Cloudy, the odd spit or shower. Some rain for a time in the afternoon then easing again evening. Overnight strong northwesterlies (gale through Cook Strait) change southerly with rain.
Highs: 18

Marlborough & Nelson
Mostly cloudy with some rain for Nelson, scattered falls spreading into Marlborough (more persistent about the Sounds). Easing in the afternoon and some sun breaking through as blustery northerlies tend a little more northwest. Winds change southerly overnight with rain.
Highs: 19-21

Canterbury
Morning heavy rain in the high country, the odd spot spreading further eastwards then conditions ease with high cloud thinning out a touch and some sun may break through in the afternoon. Late afternoon or evening a blustery southerly change arrives bringing rain. Snow lowers to 400m overnight in the south to 600m in the north of the region.
Highs: 20-24

West Coast
Rain with heavy falls then easing a touch this afternoon, northwesterlies change southwest later in the day. Showers nay clear up overnight right on the coast but expect rain to continue further inland about the Main Divide pushing over from the east with snow lowering to 500m in the south up to 800m in behind Greymouth.
Highs: 16-18

Southland & Otago
Rain develops in the morning for Southland with a southwest change, easing to showers in the evening. Rain for Otago early afternoon, easing to showers overnight. Snow lowers to 500m this evening then possibly as low as 300m for a time overnight before clearing.
Highs: 14-18