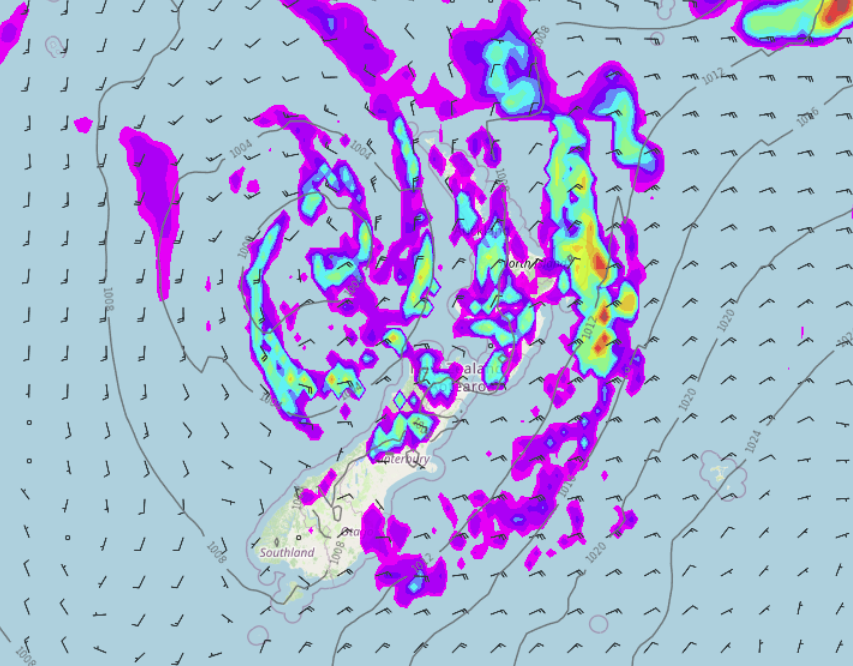 A big broad low pressure system still sits in the Tasman Sea today, it directs in a northeasterly airflow over us which brings in rain or showers for many regions. Some showers could become unstable this afternoon for the North Island.

Eastern North Island
Mostly cloudy and humid, some sun may break through at times, chance of a shower too. In the evening or overnight some rain moves in north of Napier with heavy falls. Northeasterly winds.
Highs: 24-27

Wellington
A bit cloudy but some sun could break through at times, chance of a shower. Late afternoon or evening some rain develops then easing overnight. East to northeasterly winds.
Highs: 24-28

Canterbury
Some morning rain then drying up in the afternoon and sunny spells increasing, east to northeasterly winds, perhaps a little breezy in the morning along the coast then easing. An isolated shower or two may develop inland during the afternoon then clearing at night.
Highs: 19-21

West Coast
A mix of sun and cloud, north of about Greymouth there could be the odd shower then late afternoon or early evening an isolated shower or two is possible about the ranges. Winds are mostly light.
Highs: 23-25

Southland & Otago
Mostly sunny for Southland and Central Otago after any early fog lifts, some cloud in the east though. Coastal / North Otago is cloudier with a few showers, easing in the afternoon and sunny spells may start to break through. Easterly quarter winds, breezy for coastal Otago.
Highs: 19-24