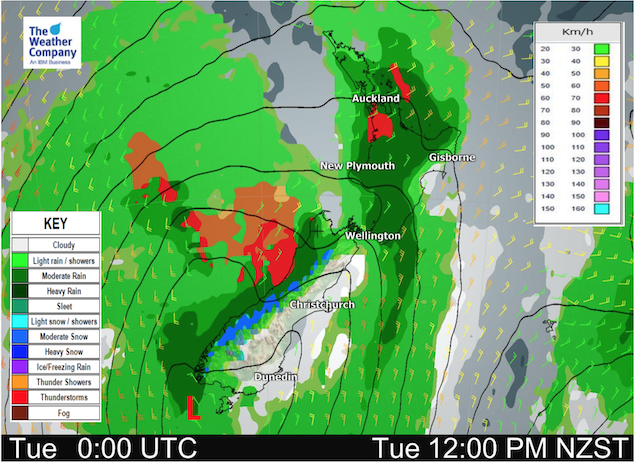 A cold front passes over New Zealand today moving in a west to east fashion, areas of heavy rain and possible thunder in the west. Scattered falls spread east for a time especially for the eastern North Island.

Northland, Auckland, Waikato & Bay Of Plenty
Conditions may be dry at first for Northland through to Waikato with some sun (showers from morning about Bay Of Plenty), a westerly change moves through around midday with heavy falls and possible thunderstorms. Showers ease again by evening.
Highs: 15-17

Western North Island (including Central North Island)
Showers turning to rain in the morning, heavy at times then easing to showers mid afternoon. A chance of thunder about Taranaki with rain. Northerlies change northwest by midday.
Highs: 13-15

Eastern North Island
High cloud, chance spot of rain. More persistent rain moves into Wairarapa in the morning as a front passes over, this rain moves further north in the afternoon / evening then clearing overnight as northeasterlies change northwest.
Highs: 16-18

Marlborough & Nelson
Morning rain then breaking to mostly sunny weather in the afternoon as northerlies tend breezy northwest. The odd shower still moves into Nelson at times passing over from the west midday onwards then clearing in the evening.
Highs: 14-16

Canterbury
Any early spots of rain clear then mostly sunny, rain about the high country will be heavy first thing then easing but persisting for much of the day before clearing away overnight. Northeasterlies tend northwest in the afternoon. Showers push in around dawn on Sunday with a fresh southwest change.
Highs: 15-17

West Coast
Early heavy rain eases to showers, there could still be isolated heavy falls at times during the day with thunderstorms and hail then easing overnight as northwesterlies change southwest.
Highs: 11-13

Southland & Otago
Sunny areas and some high cloud, chance of a spit from midday about Southland then rain develops later in the evening with a fresh southwest change before pushing into Otago overnight.
Highs: 10-15