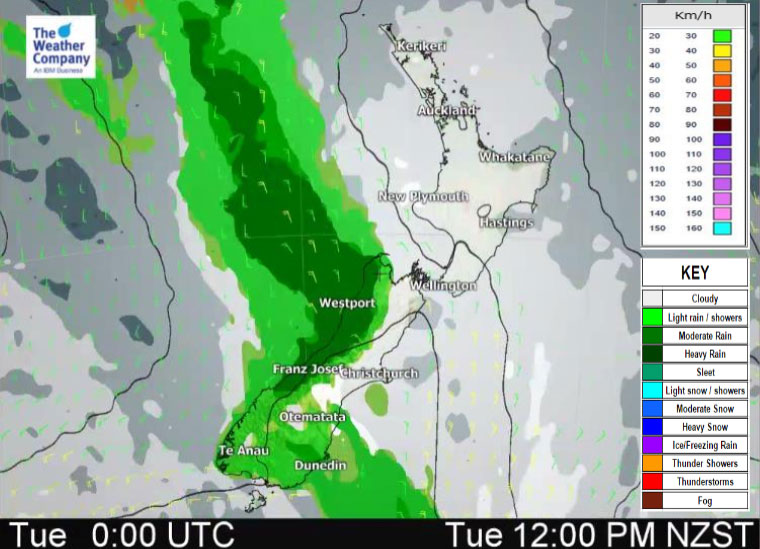 A ridge lies over the North Island today meanwhile a front pushes northwards over the South Island bringing in a southwest change.

Northland, Auckland, Waikato & Bay Of Plenty
Sunny areas and some high cloud, high cloud breaks away in the evening. Light winds from the north, tending to the northwest in the afternoon.
Highs: 18-22

Wellington
Mostly cloudy with breezy north to northwesterly winds, a few spits / showers move in later in the evening.
High: 17-18

Marlborough & Nelson
Sunny areas and some high cloud, rain spreads into Nelson during the afternoon then Marlborough in the evening before easing overnight. Breezy north to northwesterly winds.
Highs: 19-21

West Coast
Morning rain with heavy falls then easing to showers in the afternoon as northerlies change southwest. Showers clear by evening then some sun may break through the cloud before dusk.
Highs: 16-18

Southland & Otago
Early rain eases to the odd shower about Southland, sunny spells break through at times from afternoon. Westerly winds. Otago is dry at first then a few showers and some cloud moves in around midday with southwesterlies, clearing evening.
Highs: 13-18

Hey Jet, use your local WeatherWatch 10 day + HOURLY forecast to drill down more for Nelson. Also, RuralWeather.co.nz. Our new Maps pages also have thunderstorm forecasts – you can see if you’re even in a risk zone or not. Cheers 🙂
– WW