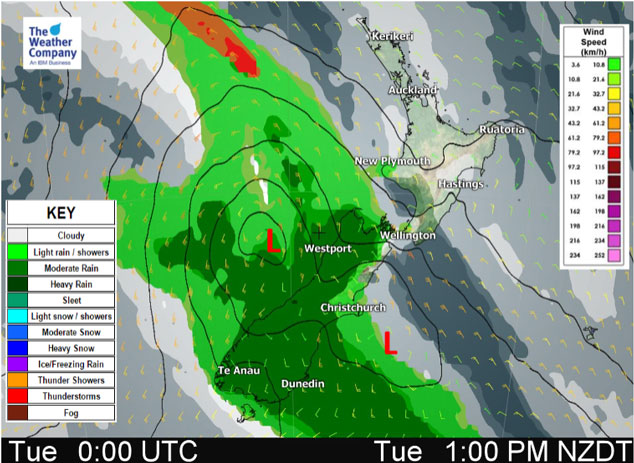 Northland, Auckland, Waikato & Bay Of Plenty
Mostly sunny with some high cloud, there may be some coastal morning cloud in the west. West to northwesterly winds more refreshing around coastal areas. A hot day for inland areas where temperatures may feel like the low to mid 30â€™s.
Highs: 27-30

Western North Island (including Central North Island)
Morning mid level cloud breaks to sunny areas, skies about Taranaki and Kapiti are a bit cloudy for most of the day, perhaps even the odd drizzle patch. Showers develop in the evening for all. Northwesterlies freshen.
Highs: 23-30

Eastern North Island
Sunny areas and some high cloud, high cloud starts to break away in the evening. North to northwesterly winds.
Highs: 32-35

Canterbury
High cloud, chance spot of rain spreading from the west. Rain moves into South Canterbury during the morning then reaching North Canterbury late afternoon as northerlies change fresh southwest. Rain about South and Mid Canterbury may be heavy before easing later in the evening.
Highs: 20-31

Southland & Otago
Rain (possibly heavy about Otago), easing from afternoon about Southland and Otago in the evening then gradually clearing. Southwesterly winds.
Highs: 13-16