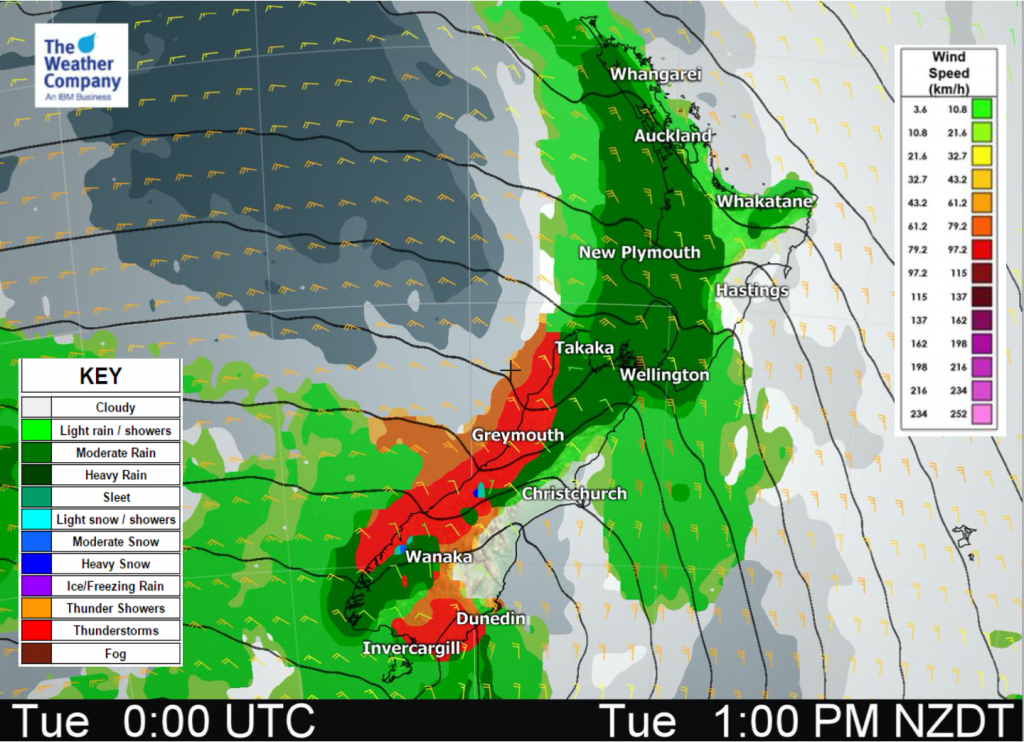 A cold front pushes in from the west today, heavy rain for some western regions and a few scattered falls spreading eastwards.

Western North Island (including Central North Island)
Cloudy with the odd shower possible, more so about Taranaki. Rain moves in around midday then clearing late afternoon as northerlies tend northwest. Winds will be brisk to strong about coastal areas.
Highs: 18-24

Eastern North Island
High cloud, a few spots of rain move through Wairarapa around midday then the odd one is possible for Hawkes Bay / Gisborne late afternoon. Once rain clears high cloud will break away to some sun before dusk. Gusty northerlies tend northwest later in the day.
Highs: 24-29

Marlborough & Nelson
Rain, may be a heavy fall in the morning especially about Nelson and the Sounds then becoming mostly sunny in the afternoon as gusty northerlies tend northwest.
Highs: 20-24

West Coast
Morning heavy rain then easing to showers, some may be heavy with thunderstorms. Northerlies tend northwest.
Highs: 16-18

Southland & Otago
Dry at first about Southland then showers develop late morning as northeast winds change northwest, showers may become heavy with a risk of thunder then easing late afternoon.  Morning high cloud breaks to mostly sunny weather by midday for Otago, morning rain for inland western Otago clears. Late afternoon there may be a shower as northwesterlies change westerly or southwest.
Highs: 18-25