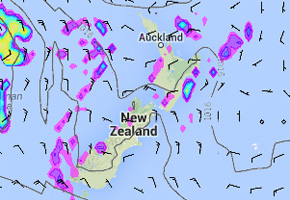 A similar situation tonight as it was last night, a bit more cloud on the West Coast of the South Island however. Easterlies ease about eastern regions. A low also begins to form in the Tasman Sea.

Eastern North Island
Showers about Hawkes Bay and Gisborne ease this evening then clear at night. Northeasterly winds ease later. The Wairarapa stays mainly clear although some cloud in the north moves away later this evening, northerlies.
Tonight’s Low: 6-8

Southland
Some cloud with the chance of a shower any of which clear this evening, clear spells overnight with northwesterly breezes.
Tonight’s Low: 6