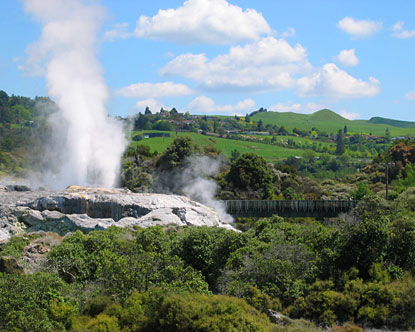 It won’t be all cloudless skies today but another mostly dry day is expected over the nation.

There’s a slight risk of an isolated shower in the Far North but the rest of New Zealand might see the odd cloudy area otherwise it’s more sunshine.

An anticyclone is not moving away quickly and not only today but much of the week is to set to remain largely settled and dry.

” it’s been quite a long, dry spell which isn’t in a hurry to end it seems” says Weather Analyst Philip Duncan.” We wish we could deliver better news for those needing rain but there’s nothing meaningful at this point” he says.

WeatherWatch.co.nz believes daytime highs have been average or slightly above over the last few days with perhaps not the intense heat of recent weeks over some areas however it doesn’t change the dry spell apart from slightly lowering the evapotranspiration figure.

There’s some talk amongst farmers that this has been the driest spell during summer for some years and figures suggest this has certainly been a lean spell of rain.

Some rainfall totals since the start of the year are down 50% of normal and in some cases between 70-80%. High temperatures have also exacerbated the problem.

Fire risks are still at last month’s levels if not slightly higher and fire bans remain in place until rain dampens down the situation significantly.

The UV Index suggests that the sun is not as intense as earlier in the season but still is high to very high over most centres.

Homepage image of a geyser, near Rotorua, where more sunshine is expected today.

Feeling a bit Autumnal in the mornings of late here in Whangarei. The easterlies have hammered us since early spring with only a few breaks in it. So as far as I am concerned our summer has not been all that good as these winds kept the temps down and are a right pain.
We have not had much humidity which is most unusual, been constant mostly in the 40-60% region.
However it is very very dry due mainly to the wind and rain will be most welcome when it arrives.

Yes it’s been quite cloudy at times but hopefully you’ve enjoyed the break from the humidity this summer or does it make it feel cooler?

Fingers crossed for some rain in about 10 days time for you.