Tues/Weds/Thur – NZ’s forecast: Windy for some in tents, bigger waves in the north (+16 Maps) 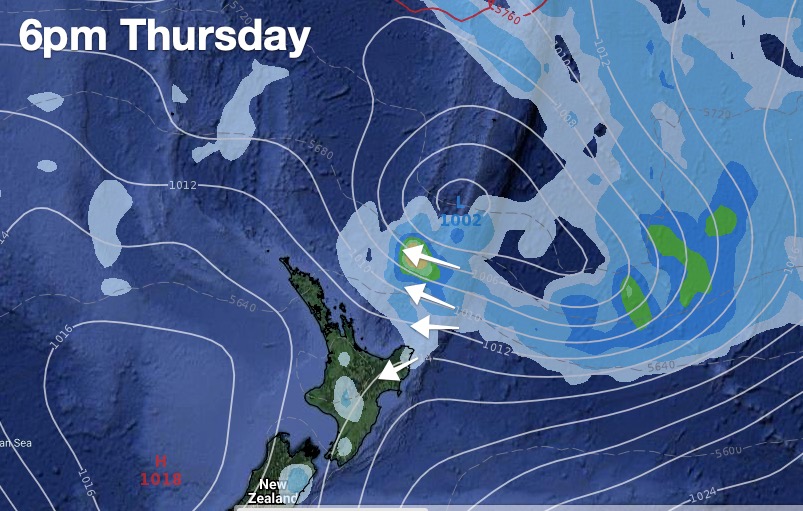 We’re covering Tuesday’s (mostly quiet) weather but also a developing sub-tropical low north east of NZ which on Wednesday and Thursday will produce more dangerous beach and marine conditions in the north eastern North Island. It will also produce gusty winds, a little problematic for some campers. The low isn’t likely to make landfall here but brushes northern and north eastern NZ.

TUESDAY:
With high pressure across most of NZ the day is fairly quiet. Winds are light for many with the usual coastal winds. However the eastern lower North Island (coastal HB, coastal Wairarapa) may have winds gusting up to 50km/h in exposed areas – not the best for camping in exposed areas and may even rip a few tents and awnings here and there. Nothing too major though – more in the annoyance zone for today. A few showers will also be in the lower south eastern North Island.

Many places are warmer than average.

WEDNESDAY/THURSDAY – OFFSHORE SUB TROPICAL LOW: MARINE AND BEACHES
Not a major low but one big enough to create bigger swells, with 2 to 2.5 metre swells in eastern Northland by Thursday morning. Gales offshore.

By Thursday night these swells may be approaching 3 metres around the eastern side of East Cape as the low deepens further offshore. These eastern swells ease on Friday in Northland but carry on in the eastern North Island down to northern Hawke’s Bay – potentially there until Saturday morning.

See Swell Maps here and keep up to date with MetService marine maps before heading out.

This alert is really for those more vulnerable and less experienced beachgoers to take extra care as the weather on land may not be too unsettled, masking the offshore system churning up the sea.

For Campers:
Winds may pick up enough to cause some issues for tents and awnings in the Upper eastern North Island. Nothing too major otherwise. Keep an eye on our news stories and your LOCAL HOURLY forecasts where ever you are camping and watch out for more dangerous but mostly hidden beach conditions (like rips in the east). Winds may gust close to gale force for a time in more exposed eastern areas – it shouldn’t linger more than a day or so. If you need more wind graphs, please visit www.RuralWeather.co.nz

High pressure continues to push in from the west.

For Farmers:
Sorry, not much rain with this one at this stage. It looks close on some maps but it’s really about 1000 kilometres too far east of NZ to bring in real rain. It may move closer – keep an eye on your local hourly forecasts here and of course at www.RuralWeather.co.nz