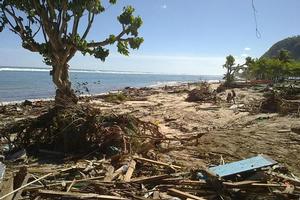 Looking back along the south coast of Upolu from the destroyed village of Lalomanu in Samoa. Photo / Dave Leng, nzherald.co.nz

Two New Zealanders have been confirmed dead and one missing, presumed dead. One was this morning identified by her family as Mary Ann White, 55.

The official death toll in Samoa is around 80.

Foreign Minister Murray McCully said there were reports that the tsunami warning system after the earthquake hit the region had worked well in some areas.

“Staff in resorts were pro-active in getting people out bed and making them to go to higher ground,” Mr McCully said.

“That is why we have had reports of fewer casualties in all around Sinalei, Coconuts etc on that part of the coast.”

However, there were concerns in other areas.

“The worry is that we haven’t been able to ascertain the same sort of reports from around Lalomanu where there was a significant amount of accommodation, some small units.

“We are not able to confirm just how well that warning system worked in that area, which is one of the reasons we being very careful about how we treat the information and forecasts we are prepared to make.”

Tsunami victim Mary Ann White and her husband Andy were holidaying in Samoa with close friends and business partners Diane and Brent Cederman.

The group own and operate the Raglan Sunset Motel and were enjoying a joint holiday in Samoa when the tragedy struck.

They are expected to return to New Zealand in the immediate future pending the completion of formalities in Samoa.

The Whites have three children and two grandchildren.

“Our hearts go out to those New Zealand families who have lost a loved one,” Acting Prime Minister Bill English said this morning.

Australian media reported one of the dead was a two-and-a-half year-old girl from New Zealand with Australian permanent residency, however other media said she may have been British.

Mr English said the Government wanted any New Zealanders who had family members in Samoa and knew they were safe to get in touch with authorities.

“That is how we will able to confirm the safety of every New Zealander.”

The death toll is expected to rise considerably today, as rescuers reach the worst hit areas in both Samoa and American Samoa about 100km away.

It was proving more difficult to move aid into Tonga – where lives were also lost – as the airport there remained closed.

Mr English told Newstalk ZB the Samoan Cabinet was meeting today and New Zealand was working with France and Australia to meet the basic needs of food, shelter and water.

“That is going to be an urgent requirement today, tomorrow, the next to house the thousands of people,” Mr English said.

New Zealand would be in there for the long haul reconstruction to Samoa.

An air force Orion is to fly over the Samoan coastline this morning, gauging damage from the tsunami and the magnitude 8.3 earthquake that preceded it and helping to search for bodies washed out to sea.

A Hercules transport plane flew in overnight, taking medical supplies and army medical personnel, as well as tents, food and temporary morgues asked for by the Samoan government.

MFAT said people concerned about family members in Samoa should try to make contact with them in the first instance. Those with ongoing concerns can call MFAT on 04 439 8000, with as many contact details as possible.

New Zealanders planning to travel to Samoa for the rest of the school holidays were last night being advised to cancel until more was known about the aftermath of yesterday’s natural disasters.

The Ministry of Foreign Affairs and Trade issued a travel advisory shortly before 5pm saying there was a high risk to travellers’ safety.

LISTEN LIVE to to the latest news with NewstalkZB – Click here to listen to NewstalkZB live online.